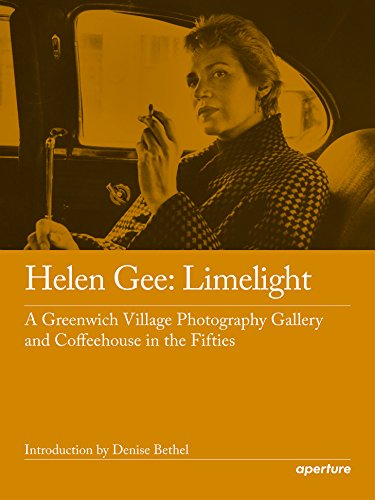 In 1954, Helen Gee opened the doors for New York’s first post-war photography gallery Limelight. Apart from being the owner, she also worked as a curator in the gallery.

Helen Gee was born Helen Charlotte Wimmer in 1919 in Jersey City, New Jersey. At the age of fifteen she moved away from her dad and stepmother, whose Nazi sympathies she did not agree with. She travelled to New York where she finished high school.

Later, during her WPA art studies, she met her husband to be – the painter Yun Gee.

Helen Gee was originally a painter, but during an exhibition at MoMA – curated by Edward Steichen – she fell for photography and started to use a camera herself.

After many years working as a retoucher, Helen wanted to transmit her love for photography to others and therefore decided to open her own space dedicated to this art form.

Although Helen Gee was not the first person to promote photography as an art form, she opened the first gallery which focused solely on this specific medium.

Artists such as Alfred Stieglitz and Julian Levy had both exhibited photography elsewhere, but they offered other types of art as well.

During Limelight’s time, Helen struggled to sell prints by legends like Ansel Adams and Edward Weston, even for prices as low as $40 or $50.

Therefore, she combined her gallery with a coffee shop to earn enough money.

After using her personal funds to support the gallery and unable to return a profit, Helen closed Limelight after the Julia Margaret Cameron show which finished January 31, 1961.

Denise Bethel writes in the book Helen Gee: Limelight, a Greenwich Village Photography Gallery and Coffeehouse in the Fifties that she wishes Helen was still alive to see that work by the same artists is now auctioned for millions of dollars.

Ahead of her time, Helen Gee was undoubtedly a pioneer.