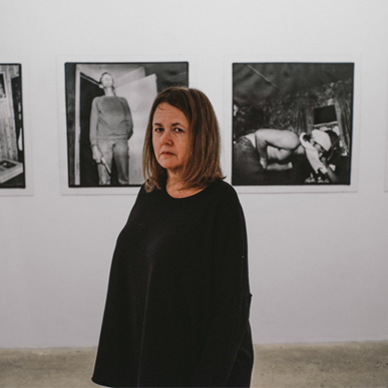 Susan Lipper, an American photographer and author, is most known for her “subjective documentary” style photography.

Originally born in New York City, Susan studied English Poetry and obtained an MFA from the Yale School of Arts in 1983. After her studies, she lived in the United Kingdom for three years before returning to the United States to pursue her documentary photography projects.

Her series of monographs, which began with Grapevine from 1988 to 1992, followed by trip from 1993 to 1999, explore vast and desolate landscapes which have often been framed through the male gaze.

These photographic essays also bring light to the communities that live within often forgotten areas such as Appalachia. In contrast to the often idyllic and masculinised perception of the American landscape, Susan documents largely dystopian spaces through her own lens.

In particular, Susan wants to bring the voice and visions of women to a type of photography that has traditionally and popularly been dominated by men. Her ongoing monograph, the final installment in her trilogy of essays, Domesticated Land, explores the Californian desert and the ways in which it has been depicted through photography over the years.

Susan is a recipient of fellowships from the National Endowment for the Arts and the New York Foundation for the Arts. In 2015 she became a recipient of the John Simon Guggenheim Memorial Foundation Fellowship. Her work is in permanent collection at the Metropolitan Museum of Art in New York City; the Museum of Contemporary Art, Los Angeles; the National Portrait Gallery in London, and the Museum of Fine Arts in Houston, among others.