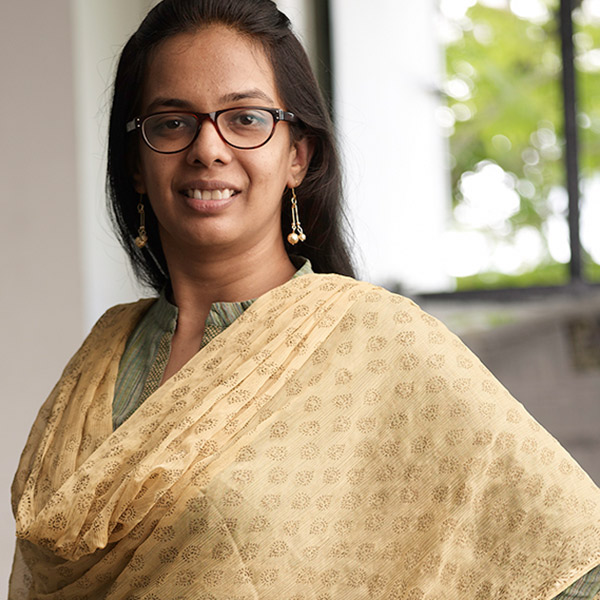 Nandini Valli Muthiah was born in Chennai, India in 1976. She earned a BA in English Literature from Madras University in 1998, followed by an MA in French Translation and Interpretation from Pondicherry University in 2000. Nandini then attended the Arts Institute at Bournemouth, UK (now Arts University Bournemouth) and graduated in 2005 with a BA in Photography. She lives and works in Chennai.

Nandini’s first major collection, The Definitive Reincarnate (2006), explores the concept of incarnated divinity through the figure of the Hindu deity Vishnu. The photographs have rich saturated colours and show Vishnu in modern settings, such as sitting on a bed looking forlorn. According to Nandini, the idea of The Definitive Reincarnate is to ‘take Vishnu and sort of update him’.

Nandini’s next solo work, Remembering to Forget, was conceived in 2008 for a Fellowship grant received from the Tierney Foundation, New York. It is an ode to childhood memories of ‘fancy dress’ competitions, in which young children dress up as deities, celebrities, politicians, doctors, and members of other professions. In the pictures, the children stand in front of a bright background depicting a colourful building. Some children look unsure and nervous; others pose confidently. The title suggests the ironic need to intentionally ‘dress-up’ to escape reality and enter a fantastical or aspirational space, a material act which facilitates imagination. As in previous works, the photographs exemplify Nandini’s love of colour; in her own words, ‘I don’t think I have completely developed my style yet. I am still experimenting but I love colour and that is definitely a big part of my style.’

In 2016, Nandini created The Devotee, a series of photographs of men and boys on an arduous pilgrimage to Sabarimala – a temple located on a hilltop in Kerala, India. It is dedicated to the Hindu celibate deity Ayyappan, the son of Shiva – one of the principal deities of Hinduism – and Mohini, a feminine incarnation of Vishnu. The devotees of the temple are mostly men; until a ban was lifted in 2018, only pre-pubescent girls and post-menopausal women were permitted to visit. Before embarking on a journey to the temple, devotees must undertake a forty day penance, including abstaining from worldly pleasures and wearing certain colours, such as black. In Nandini’s images, the pilgrims stare into the camera and it is hard to decipher their prevailing emotions. According to Nandini, ‘the anonymity of the people lends a beauty to the portraits. I think it allows viewers to create their own narratives about the person within the frame. In a way, they end up building a bond with the image, and with the person too.’