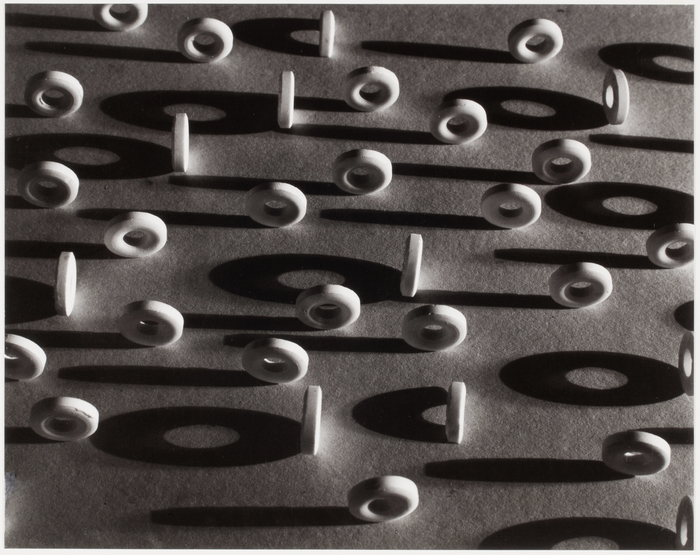 Ruth Bernhard was born in Berlin in 1905 and studied at the Berlin Academy of Art. After joining her father, designer and typographer Lucian Bernhard, in New York in 1927, she began a career in commercial photography. Ruth photographed the first catalogue published by MoMA (New York) for the exhibition Machine Art in 1934. She began photographing her famous female nudes in the early 1930s, and soon became acquainted with Berenice Abbott and her circle. She met Edward Weston in 1935 and, inspired by his work, became his acolyte and moved to California. Ruth eventually established a studio in San Francisco in 1953 and aligned with the ‘West Coast School’ or Group f/64, which included Weston, Ansel Adams, Imogen Cunningham, Dorothea Lange and Minor White.

Ruth primarily photographed in a studio and in black and white, taking sensuous still lives and dramatically lit nude figures. She specialised in photographing sea shells and became known for creating abstract shapes and sculptural forms using light and shadow.

From the 70s onwards, Ruth dedicated herself increasingly to teaching, running a course for the University of California Extension Program, and giving workshops and master classes throughout the United States. She also published several books of her work in her seven decade career.

In one of her most famous photographs, ‘In the Box-Horizontal’, Ruth posed her model inside the discarded box of a new photographic enlarger she had just unpacked.  The resulting sensual, sculptural, perfectly-framed nude exemplifies her style. In a rare non-studio work, ‘In the Waves’, she achieves a mesmeric sense of movement, with light dazzling on the water and the body.

Ruth died on December 18, 2006 at the age of 101. Her papers were bequeathed to  Princeton University and are held in the Manuscripts Division.