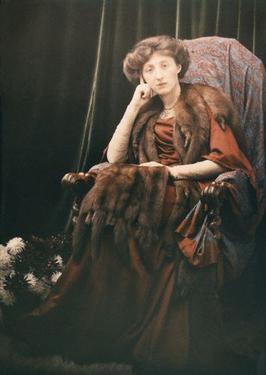 Mary Olive Edis opened her first studio with her sister Katherine (Legat) in the early 1900s in Norfolk and specialised in photographing fishermen. The striking portrait of Latter Day Cox is a fine example.

She also was known for her Pictorialist work, reminiscent of Julia Margaret Cameron, and had studios in Farnham, Surrey, and Ladbroke Grove, London. Olive worked with a glass plate negative camera and also produced sepia platinotypes.

She was known for using natural light and shadow to create strikingly modern portraits. Her many famous sitters included Shaw, Hardy, Lloyd George and Mrs Pankhurst.  Olive also had an innovative technical genius that was entirely self-taught. She pioneered the use of colour autochrome portraits from 1912 onwards and designed and patented her own diascope, a viewer for autochromes.

Olive was one of the first women to be accepted as a member of the Royal Photographic Society in 1913 and as a Fellow in 1914. During WW1 she was commissioned to photograph British Women’s services and the battlefields of France and Flanders 1918-19 for the Imperial War Museum. These pictures, taken with natural light and distinct from her studio work, are a unique record of the time and of women’s contributions to the war and its aftermath.

Olive’s sister left the studio upon her marriage but Olive continued to work as a professional photographer until her death in 1955. Norfolk Museum Collections holds the largest archive of her work, which includes prints, autochromes, glass plate negatives and cameras.

Collections of her work are also held in the Imperial War Museum and the National Portrait Gallery. A BBC documentary with photographer Ian Rankin about Olive Edis was produced in 2017.