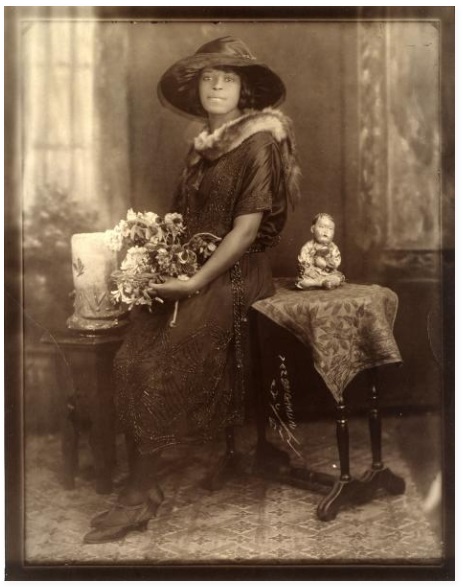 Jennie Louise Van Der Zee, an African American woman born in Lenox, Massachusetts, moved with her family to New York in the early 20th century, where her parents were employed by President Ulysses S. Grant as maid and butler. Jennie married Ernest Toussaint Welcome, inventor and entrepreneur, and together they became the husband-and-wife team of their time.

Jennie stood out as the first African-American owner of a business in Harlem where, at the time, many whites resided. The Toussaint Conservatory of Art and Music in Harlem came into being, an art school and photographic studio which ran for over 40 years. The Conservatory’s first advertisement appeared in the first issue of the National Association for the Advancement of Coloured People’s (NAACP) journal, The Crisis, in 1909. This was a full-page advertisement placed by Jennie for her art school and photographic studio referring to herself as, ‘The Foremost Female Artist of the Race’.

Known as the ‘Legendary Harlemite’, Jennie was also unique in that she was one of the only African American women filmmakers from the silent film industry. Black filmmakers, audiences and film critics, theatre owners and managers were on the increase and were protesting against demeaning characters and stereotypes in many American films; they wanted films to tell the real stories of the lives they led and could hope to lead.

The Toussaint Welcomes were making newsreels, like most of the filmmakers in Harlem at that time. On June 8, 1916, the Toussaint Motion Picture Exchange announced in the Chicago Defender a film on African-American soldiers overseas titled, ‘Doing Their Bit’, which recognised African-American contributions to War World I focusing on their military participation in the war.

Acknowledging African-American patriotism, Jennie made Charge of the Coloured Division: Somewhere in France, under The Toussaint Pictorial Company. Nearly 100,000 full-colour posters of her painting, featuring an African American war hero with the 15th’s insignia on his canteen and his bayonet in the chest of a German soldier, were distributed across the country. African American soldiers would spend more days in the trenches than any other American unit and she became one of the first black women filmmakers in the country who took a stand to defend them. Between 1917 and 1918 The Toussaint Pictorial Company published ‘A Pictorial History of the Negro in the Great War’, a memorial book that featured this work.

After the war ended, the War Savings Stamp Committee accepted Jennie’s painting, Charge of the Coloured Divisions, for use as a poster. She and her husband copyrighted the work in August 1918. No physical copies of their work are known to exist. This would be the only painting accepted by the U.S. government’s National War Savings Committee made by an African-American artist to be used as a war poster in the War Savings Stamp and Liberty Loan drives. These posters for Liberty Loans raised huge amounts for the war effort. The Toussaint Pictorial Company also published one million patriotic postcards of African-American or “race” soldiers.

Isolation from white America forced the black community to grow stronger and more self-reliant, with the Harlem renaissance creating a black cultural mecca from around 1910 to mid-1930s. The rise of the social and artistic explosion that resulted from the emergence of a solid group of black professionals meant that black photographers showcased their black subjects in ways that reflected dignity and personal pride, in contrast to those by white photographers. Their work deeply reflected the life of the people of black America; their primary concerns were for income, family support, and business advancement enjoyed by established white photographers like Stieglitz and Edward Steichen who were independently wealthy. Jennie was part of a group of African-American women filmmakers who helped to establish the US cinema industry through risk-taking and trailblazing, their efforts changing the prevailing view of African Americans and establishing the validity of the lives of African Americans.