By Gabby Kynoch1st March 2022No Comments 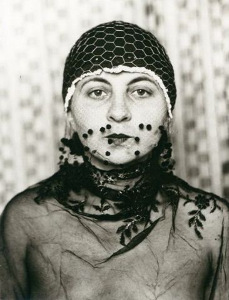 Gertrud Arndt (born Gertrud Hantschk in Upper Silicia, Poland, in 1903) set out to become an architect, beginning a three-year apprenticeship in 1919. Initially, she taught herself photography so she could photograph buildings.

She also attended courses in typography, drawing, and art history at the Kunstgewerbeschule (School of Design) and was awarded a Bauhaus scholarship to continue her studies under László Moholy-Nagy. She remained at the school from 1923 – 1927.

Gertrud then joined her husband’s architectural practice as his photographer. When they returned to the Bauhaus in 1929, she set up a darkroom in her bathroom and entered her last, most productive period.

During this time, she created portraits of friends in the ‘New Vision’ style, as well as a series of 43 performative self-portraits which she called ‘Mask Portraits’. Incorporating costuming and masquerade with props such as veils, flowers, and lace, she experimented with traditional gender roles, just as her contemporaries Marta Astfalck-Vietz and Claude Cahun had done.

Gertrud explored a range of personae in her work, representative of the restrictive feminine roles defining contemporary women. These last images are in sharp contrast to the modern woman depicted in her 1926 Self-Portrait.