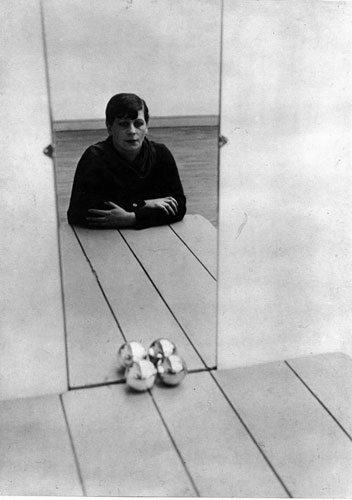 Florence Henri did not just live through arguably the most exciting period in the history of art – she was at its very frontier. Her extraordinary life led to extraordinary innovations in the field of photography. Born in 1893 in New York, Florence moved around Europe in her childhood. After both of her parents died, she settled in Italy with her aunt. It was in Italy that she was introduced to Futurism, one of the first major movements of modern art.

She studied music in Rome, Vienna, and London, until deciding to move to Berlin to study painting. There, Florence was surrounded by the likes of Vasily Kandinsky and Johann Walter-Kurau and was exposed to abstract and post-Impressionist art. She stayed there during WWI, making a living by composing music for silent movies. However, her artistic exploration did not stop there – she later moved to Paris, to work and study under Andre Lhote, working in late Cubism. Photography entered her life when she came to Dessau, Germany. The era of Bauhaus had begun, and Florence was there to learn about and develop this iconic movement. She saw the power that photography had as a new medium and used it to manipulate perception, pioneering Surrealist photography.

Florence used mirrors, negative space, contrasts, and industrial materials such as metal and wood to create compositions that have multiple perspectives and viewpoints. Her unique background gave her the inspiration and ability to incorporate principles from different traditions of the early 20th century, enabling her to represent a new kind of photography. She also worked during the period when women were establishing themselves in art, and could finally depict their own bodies. Florence was part of this movement, and with her series of nude photographs of women, such as Nu, she showed candour, simplicity, and tenderness, putting women in charge of their bodies in her own unique way.