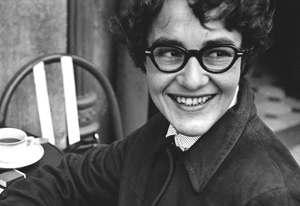 One of the leading women photographers of the 20th century, Evelyn Hofer was born in Marburg, Germany in 1922.

After fleeing Nazism with her family, she apprenticed to photographers in both Basel and Zurich, including Hans Finsler — one of the pioneers of ‘New Objectivity’, a movement which championed realism and rejected the abstract tendencies of Expressionism (another prevailing style of the period).

Evelyn’s training covered both the technical and aesthetic aspects of photography, encompassing art theory as well as printing. Her career as a freelance photographer began in New York in the early 1950s when she obtained her first commissions for fashion and editorial work for Harper’s Bazaar from art director Alexey Brodovitch. His other photographic protégées included Lillian Bassman (1917-2012).

In the late 1950s, Evelyn was chosen to provide the imagery for Mary McCarthy’s  iconic Stones of Florence (1959). She went on to collaborate with other renowned authors on similar books, mixing portraits and land or cityscapes of Dublin (1967), London, Paris, New York (1965), Washington D.C. (1966), and Emerson in Italy (1986).

Evelyn was also known for her journalistic work; she photographed a poignant 15-page spread for The Sunday Times Magazine (16th February 1975), ‘Life Inside’ — a documentation of life inside Britain’s prisons — and also the interiors of Andy Warhol’s grand townhouse in ‘ The Secret Warhol’ (Vanity Fair July 1987).

Evelyn was a proponent of both colour and black and white photography, regularly using the complicated dye transfer printing process. She used a 4×5 large-format camera mounted on a tripod with a dark cloth at the back, which was challenging to use for portraits in long exposures and difficult to focus.  However, this method enabled her to achieve a sensitivity and stillness in her portraiture, the work for which she is perhaps best known.

Like August Sander and William Eggleston, Evelyn photographed subjects in their natural environment. She photographed various communities, from Dublin gravediggers to Harlem churchgoers posing with bicycles, in football shirts, or against a flowering cherry tree  – capturing the magical details of everyday life.

Her still life images, which she focused on from the 1970s onwards, display light and colour evocative of the Old Masters she admired. Her influence can be seen today in the contemporary work of Rineke Dijkstra and Judith Joy Ross.

Evelyn died in 2009 in Mexico City. Her long-time assistant, Andreas Pauly, holds her archive. Her work can also be seen at the Danziger Gallery, New York, and is held in major photographic collections including the Brooklyn Museum, Museum of Fine Art Houston, and the High Museum of Art, Atlanta.