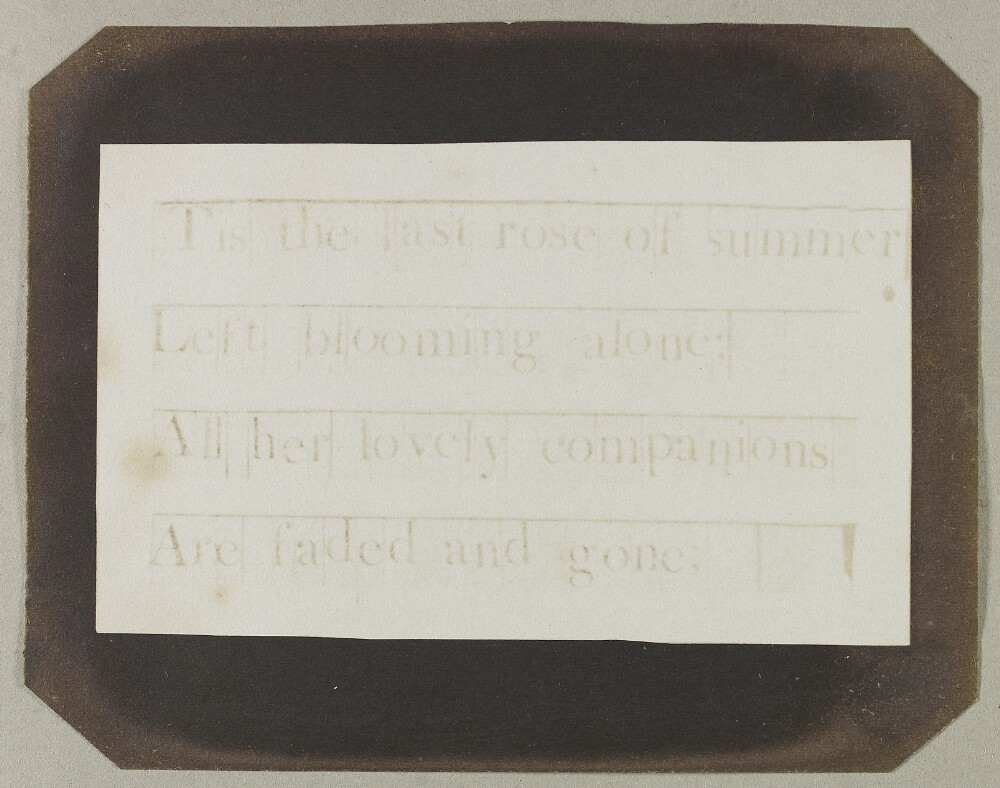 Constance Fox Talbot is considered by many to be the first woman to take a photograph. Despite this, her interest in photography is widely debated. She was married to William Henry Fox Talbot, one of the inventors of photography, and, while some argue that Constance shared her husband’s enthusiasm for this new technology, many suggest that her interest didn’t extend beyond William’s involvement in the medium.

Only one photograph still exists that can conclusively be attributed to Constance: a copy of some lines from Thomas Moore’s poem “Tis the last rose of summer”, which she mentions composing in an 1843 letter to Henry. A similar copy of some handwritten lines from another Moore poem have also been attributed to her, although the proof of this is less certain. Her letters, however, do provide evidence that Constance was using a camera as early as May 1839, mere months after her husband’s experiments were made public, and her interest in his photography is evident even earlier than this. This interest was mutual, with William commenting on contemporaries whose photographs may be of interest in his letters to her.

On 21st May 1839, Constance wrote that she had been ‘labouring hard at the Photographs’ and that, while the attempts had largely been unsuccessful, she ‘shall have gained experience […] & therefore not wholly wasted [her] time & strength’. Although this is a brief glimpse into Constance’s relationship with photography, it suggests a desire to improve upon her photographing ability independent of her husband’s direction, with her photograph from 1843 suggesting this interest was not short lived. Unfortunately, Constance’s work has been overshadowed by her husband and it is possible some of her photographs may have been falsely attributed to him, with her letters being the primary evidence of any involvement at all.