Oscars: Where Are The Women?

Perhaps it is scale that is the problem? Are women’s films too intimate? Too arty? Too Indie? Too feminine?

Paula Vellet asks, ‘Why are the Oscars so male?’

There is a long list of directors who have never won an Oscar.  Orson Welles, Alfred Hitchcock, Wes Anderson, Pedro Almovadar, Quentin Tarantino, Stanley Kubrick, Ingmar Bergman… but they have all been nominated. Only five women have ever been nominated for the Oscar for Best Director over the entire history of the award. Sadly, pioneering directors like Ida Lupino and Agnes Varda in the 50s, and Amy Hecklerling and Julie Dash in the 80s and 90s, never appeared in those lists. The only woman to win a Golden Globe for directing was Barbara Streisand for her film Yentl in 1984. However, she didn’t take home the Oscar.

The first female director to be nominated for an Oscar was Lina Wertmüller in 1976 for her WW2 film Seven Beauties, her 10th feature film, which lost out to John Guilbert Avildsen (the director of the Karate Kid films) with his first Rocky film. The next was Jane Campion for her 3rd feature, The Piano, in 1993. This beautiful yet harrowing period drama about a mute pianist’s (Holly Hunter) abusive, arranged marriage to a wealthy landowner (Harvey Keitel) earned Jane a screenplay award, but the director award went to Steven Spielberg for Schindler’s List. The Academy likes big theme pictures and biopics. Is the topic of the film the crucial element when judging who will be awarded the Best Director accolade?

Next up was Sofia Coppola’s 2003 dreamlike Lost in Translation, which lost to Peter Jackson for The Lord of the Rings: The Return of the King but earned her the Original Screenplay award. Patty Jenkins’ Monster won Charlize Theron the acting gong, but there was no award for the director. Perhaps it is scale that is the problem? Are women’s films too intimate? Too arty? Too Indie? Too feminine? Kathryn Bigelow finally struck Oscar gold in 2010 with the brutally realistic Iraq war drama The Hurt Locker, winning both Best Picture and Best Director. With this, a woman finally captured the Academy zeitgeist with an indisputably powerful film – but was it a one-off? The most recent female director to be nominated was Greta Gerwig for Lady Bird in 2018, but the coming of age/dramatic comedy lost out to the otherworldliness of Guillermo del Toro’s The Shape Of Water.

Enter 2019 and again no female directors are nominated for an Oscar. Marielle Heller’s A Beautiful Day in the Neighborhood, Lulu Wang’s The Farewell, Greta Gerwig’s Little Women, Lorene Scafaria’s Hustlers, Céline Sciamma’s Portrait of a Lady on Fire, Alma Har’el’s Honey Boy, Melina Matsoukas’ Queen & Slim and Joanna Hogg’s The Souvenir were not nominated, though they were consistently ranked among the most critically acclaimed movies of the year. Cathy Yan’s Birds of Prey, Niki Caro’s Mulan, Cate Shortland’s Black Widow, Chloé Zhao’s The Eternals and Patty Jenkins’ Wonder Woman 1984 were also left out. Why were these great films not in the running?

According to The Academy rules, directors are nominated by members of the director branch. And to become a member, you have to be nominated by other directors and have at least two films under your belt ‘of sufficient calibre’, ‘reflecting the high standards of the Academy’, and made in the last ten years. Few women get the chance to make their third and fourth movies, unlike their successful male debutant counterparts. Often studios are reluctant to back women-led stories or entrust big budgets to women filmmakers, despite numerous examples of box office success. Melina Matsoukas’ Queen & Slim was made for $17m and has earned nearly $50m at the box office; Dee Rees’s 2017 Mudbound, was made for $10m and earned $117m. It took director Patty Jenkins ten years to finance and find a studio for the wildly successful Wonder Woman (Box office $822m).

The good news is that voting and membership rules are changing, along with representation and inclusion standards. This year, 23 of the 33 new directors invited to join The Academy were women. For the Oscars 2020/21 we have high hopes for the ground-breaking work of two nominees – Chloe Zhao’s Nomadland and Emerald Fennell’s Promising Young Woman. Nomadland‘s universal theme of self-discovery and its topical setting of homelessness surely bolsters its chances. In the film, Chloe gives us a unique picture of communities like the rodeo cowboys of her previous film The Rider and reservation life in Songs My Brothers Taught Me and The Eternals; perhaps this year her immersive gaze will resonate even more strongly.  Promising Young Woman may also strike a chord as the issue of rape and sexual abuse achieves greater prominence in the media, as evidenced by Michaela Cole’s astonishing BBC/HBO drama of last year, I May Destroy You (another awards snub but this time from The Golden Globes).

Women have fared better in the Best Foreign Language/International Film category. In the last few decades, one out of the five nominees has frequently been a woman. 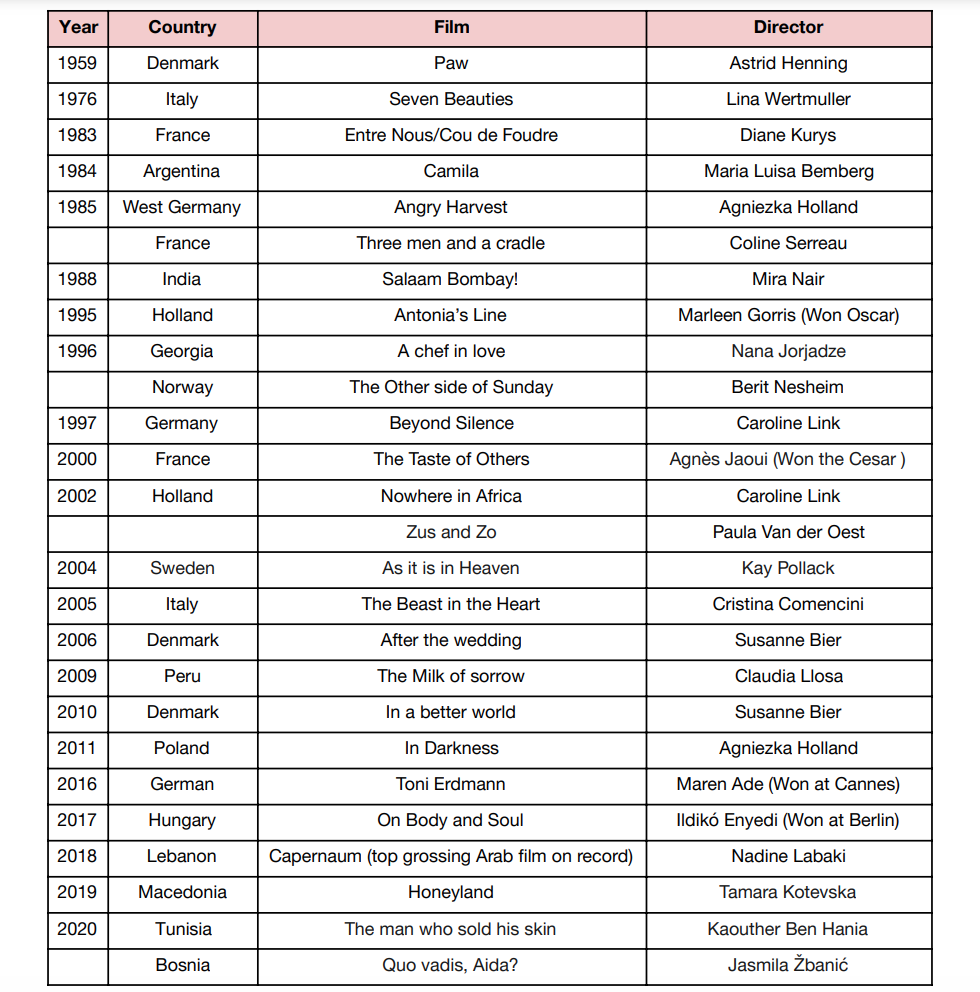 We have high hopes for Jasmila and Kaouther, but it is disappointing that great films such as Amanda Kernell’s Charter (Sweden) and Naomi Kawase’s True Mothers (Japan) were left off the list. 91 year old Lina Wertmüller will be one of this year’s recipients of the Lifetime Achievement Oscar. Let us hope it won’t be the only overdue award of the night for women in film.