By PlanetHeroines2nd August 2022No Comments 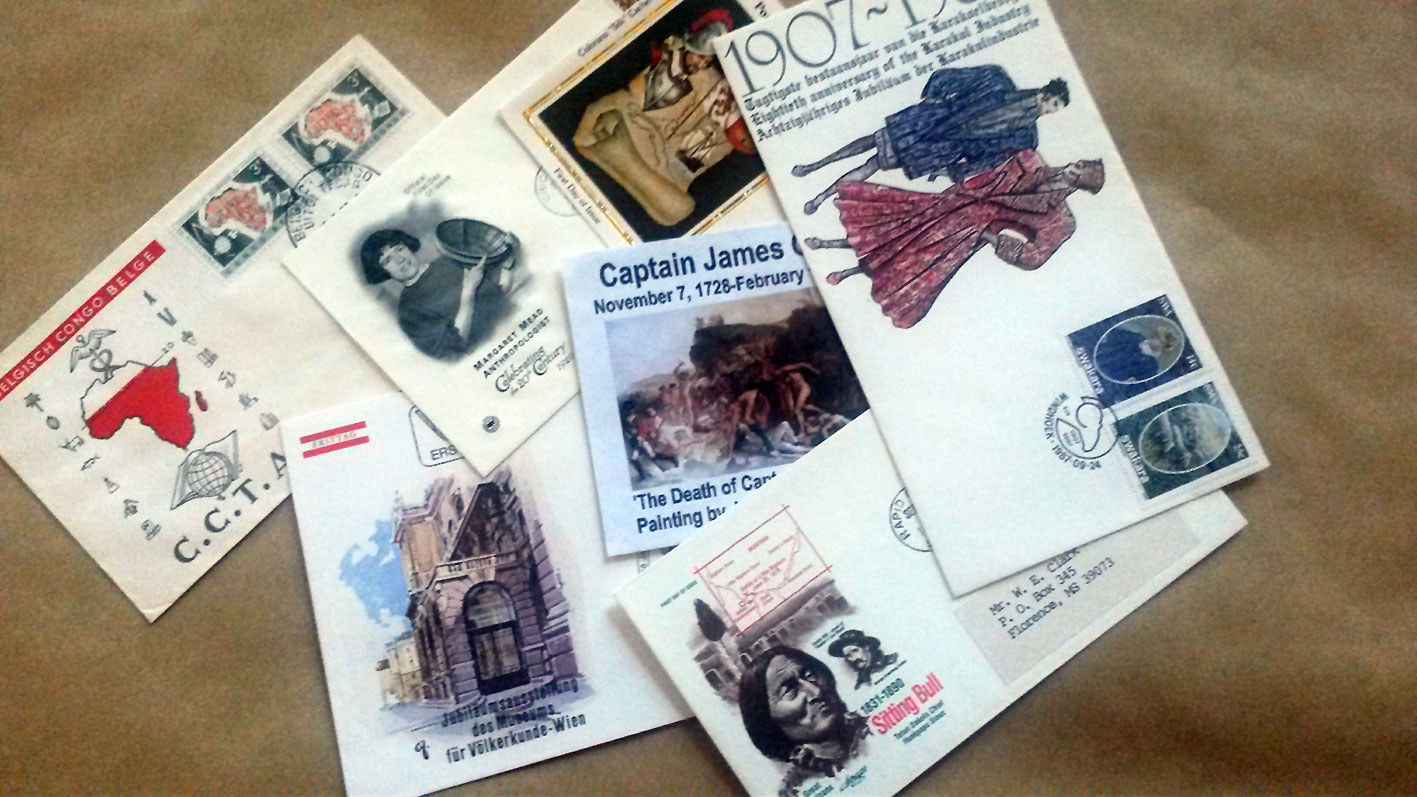 What we saw at the hub in Chelsea was only a partial representation of an exhibition and installation that Lisl Ponger held at the Weltmuseum, a museum of ethnography in Vienna.  The exhibition was titled The Master Narrative und Don Durito.  It featured staged photographs of people playingthe parts of Christopher Columbus, Margaret Mead and Indiana Jones, among others, as well as an audio visual display featuring stamps and first day covers.

That title The Master Narrative und Don Durito may need a word or two  of explanation. The notion of the Master Narrative comes partly from Jean-Francois Lyotard (1924-1988): a French postmodernist philosopher and literary theorist, who was was skeptical about grand theories in general, whether Freud or Marx, whether left or right wing, skeptical also that history flowed only in one direction. He asserted that coherent, overarching narratives were no longer possible or desirable.

As for Don Durito, he is a fictional beetle created by somebody known as Subcomandante Marcos, an otherwise anonymous spokesman for the Zapatists Movement in Mexico, who’s been described as a ‘postmodern Che Guevara.’  In the stories, Don Durito is a sort of Don Quixote figure who fights against neo-Liberalism, late period capitalism, globalization and so on.

Ponger’s project, not to undermine its complexity, is about the constructed nature of cultural and racial identity, about otherness, the relationship between the personal and the public, about imperialism, colonization, and how we deal with the ongoing and apparently insolvable legacy of that.

Ponger sidles up to the many issues involved in an extraordinarily subtle and oblique way.  She foregrounds the postage stamp, something ephemeral and yet collectable, visually appealing, created by governments, and when attached to a First Day Cover, generally celebrating some important yet contestable issue, be it voyages of James Cook, Gauguin in the French colonies or Star Trek.

In some way all artist are now post-colonialists as well as post-modernists.  Questioning the culture of the museum, of collecting, of curating, has become a significant issue, whether in the works ofMark Dion who created a kind of faux anthropological exhibition at the Whitechapel Gallery, or Kadar Attia whose exhibition at the Hayward had at its centre an installation called The Repair from Occident to Extra-Occidental Cultures, a collection of decontextualized ethnographical exhibits.

None of this is simple or easy. Putting just about anything in a display cabinet or vitrine changes its status: it suddenly looks like a museum piece regardless of its real value..

Lisl Ponger is one of the artists who is trying to subvert museums’ easy historical assumptions of collecting and the museum, while still engaging, and indeed entertaining, an audience.

Geoff Nicholson is best known as a novelist, whose work includes Still Life With Volkswagens, The City Under the Skin and Bleeding London. The last of these was the inspiration for Glostorama!.  As a journalist he has written extensively about art and photography for Modern Painters, Art Review, The Guardian, the Daily Telegraph and The Los Angeles Review of Books where he is a contributing editor. Subjects have included Martin Parr, Bruce Gilden, Vivian Maier and Mariko Mori.

You can view Lisl Ponger’s The Master Narrative and Don Durito via Vimeo.