The photographic work of Karen Knorr is the Fox Talbot Museum’s second exhibition in their 2018 Women and Power celebration. The work arises out of the cultural research she undertakes and is in response to traditions, materials, furniture and ways of living. 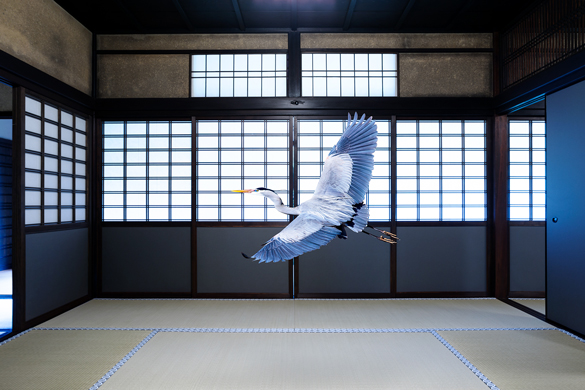 Here, Knorr celebrates the rich visual culture, foundation myths and stories of India, such as the Ramayana focusing on Rajasthan, using sacred and secular sites to consider caste, femininity and its relationship to the animal world. Interiors are painstakingly photographed with a large format analogue camera and high resolution digital cameras. Live animals photographed in sanctuaries, zoos and cities are inserted into the architectural sites, fusing high resolution digital with analogue photography.  These animals, placed digitally into palaces, mausoleums, temples and holy sites, interrogate Indian cultural heritage and rigid hierarchies.  Cranes, zebus, langurs, tigers and elephants mutate from princely pets to avatars of past feminine historic characters, blurring boundaries between reality and illusion and reinventing the ancient Panchatantra tales for the 21st century. Visit the India Song site.

Undertaken in Daitoku-ji’s Obai-in temple, this work is part of Knorr’s on-going series titled “Monogatari”, a piece inspired by the artist’s reflection of Japan’s cultural heritage and the wabi-sabi aesthetic (a Japanese sense of beauty that emphasizes simplicity and imperfection) during her travels through the country in 2012. Themes include animal life, Japanese cultural heritage, and myths; especially those of animals appearing in the temple and shrine architecture of Tokyo, Nara, and Kyoto, and those featured in the Tale of Genji. Knorr’s work also introduces animals that personify ghosts and supernatural monsters belonging to local folklore. Women wearing kimonos also appear to symbolize the omnipresence of tradition. Visit the Monogatari site.