On the 12th annual International Transgender Day of Visibility, Hundred Heroines is paying homage to transgender and gender non-conforming photographers, past and present. Although artists have long been tackling gender norms and at the forefront of the LGBTQ+ rights movement, history has not always been kind to them. Read on to (re)discover the work of gender nonconforming artist Claude Cahun (born. 1894) who died relatively unknown in 1954. 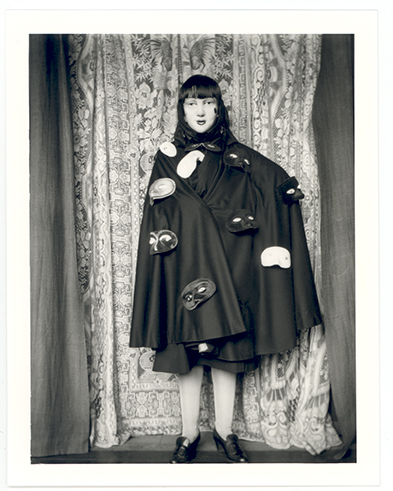 Self portrait (in robe with masks attached), 1928 © Claude Cahun. Courtesy of the Jersey Heritage Collections

Long before the terms genderqueer or non-binary were printed on the pages of zines in the 1970s, eventually becoming popular vernacular, French artist Claude Cahun was precociously pushing against the gender binary. A passage in Claude’s autobiography, Disavowals, elucidates their relationship with gender: “Masculine? Feminine? It depends on the situation. Neuter is the only gender that always suits me.”

A writer, photographer and sculptor, born in 1894, Claude’s artistic work explored the performativity and multiplicity of gender. From dressing as a circus performer and donning masks, Claude’s self-portraits often toyed with both feminine and masculine personas. Choosing to go by the name Claude, sporting short cropped hair and wearing trousers were all manifestations of a life lived beyond the binary.

For Claude, exploring the limits of male and female identities was not merely a critique of societal gender norms, but rather a highly introspective endeavour. Their carefully constructed portraits are subversive and enigmatic, with Claude sometimes heavily disguised and almost unrecognisable. Claude put into words their artistic process, writing, “Under this mask, another mask. I will never finish removing all these faces.”

Legal recognition of transgender and gender nonconforming people is recent, and still not a reality in a majority of countries globally. Although advances have been made to deconstruct normative understandings of gender, it is too early to sequester the conversation of transgender or gender nonconforming visibility to the past; incidents of violence against trans communities are now more frequent than ever.

Hundred Heroines recognises the importance of looking back and uncovering the hidden histories of artists such as Claude Cahun – whose nonconformity undoubtedly contributed to their lack of recognition. Celebrating artists who were previously ostracised or dismissed is critical to rendering visible those who have been hidden for too long.

all images Courtesy of the Jersey Heritage Collections

Alex Schmider, Associate Director of Transgender Representation at GLAAD explains “it is essential that when reporting on a transgender person — whatever the story — their name, gender, and pronoun reflect how they identify and live their lives.” Misgendering or deadnaming non-binary and transgender people further contributes to the erasure of their existence from history. In order to celebrate Claude’s artistic legacy, we must also honour their identity and respect their chosen name and rejection of binary gender signifiers. For this reason, gender-neutral pronouns are used throughout this piece.