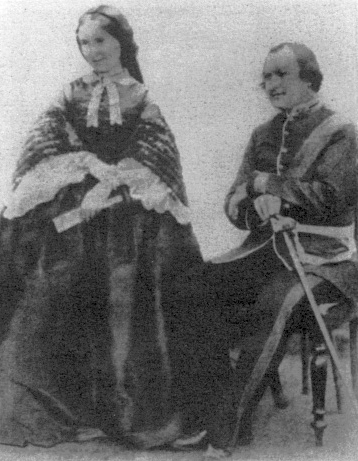 Photograph of Harriet and Robert Tytler, before 1872 via Wikipedia

Harriet Tytler was a British photographer, artist, and writer. A true pioneer of photographic practices in the 1800s, she created over 300 photographs in collaboration with her husband.

Harriet was born in India in 1831, while her father was working in the military. In 1848 she married Major Robert Christopher Tytler, and the two began working together to photograph India. Having recently fallen pregnant, Harriet was the only British woman able to remain in India for the 1857 Siege of Delhi. Therefore, their photographs – coupled with Harriet’s memoir An Englishwoman in India – form an extremely valuable part of British military history. Robert was away for the majority of the uprising, meaning that Harriet can be largely credited with the works. However, Robert is often singularly credited, underlining the gender imbalances of early photographic practices which continue to persist.

Passing on their passion for visual culture, Harriet and Robert exposed their son Stanley to art and photography during his childhood. Growing up in Australia, Stanley became a notable artist and founded the B.C. Society of Fine Arts in 1909.