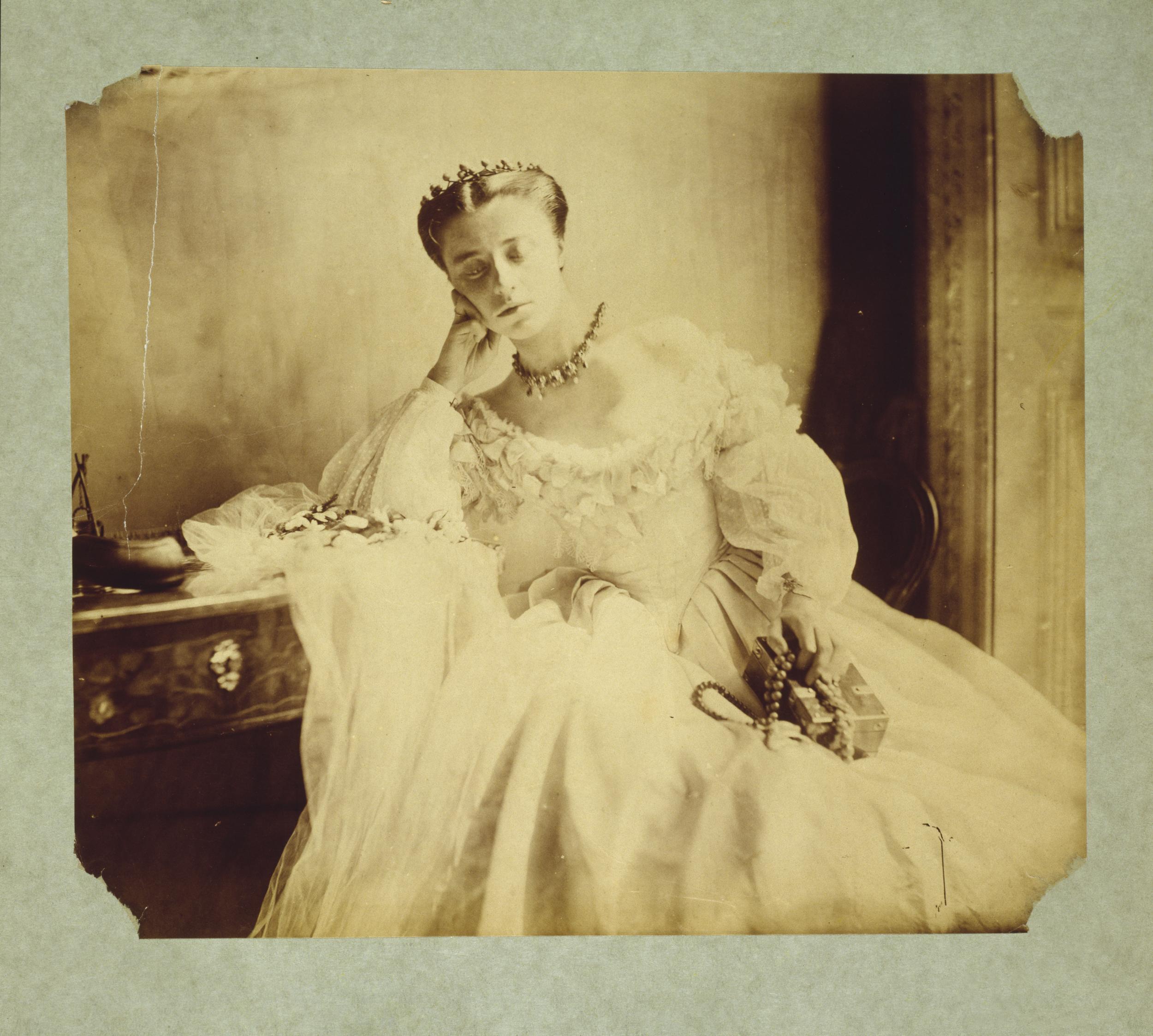 Lady Clementina Hawarden (1822-1865) was a prolific amateur photographer, best known for taking portraits of her daughters, which were characterised by acute attention to detail, including light and the inclusion of props.

Lady Clementina was born on 1st June 1882 to Admiral Charles Elphinestone Fleeming and Catalina Paulina Alessandro. Not much is known about her as she did not keep a diary, and few of her letters remain. Her photographs, however – a staggering 800 or so made within a short span – provide insight into her life.

Lady Clementina married Cornwallis Maude, 4th Viscount of Hawarden, in 1845 and lived in London until 1857, before moving to the family estate in Dundrum, Ireland. Here, she  began her first experiments in landscape photography. During this time she also gave birth to ten children – eight girls and two boys – and was a devoted mother. Despite the rigours of motherhood, Lady Clementina didn’t let her passion for photography waver.

The family moved back to London in 1859, and Lady Clementina began photographing her daughters, first creating stereoscopic photographs, and later moving to large-format portraits. She set up a studio in the family’s South Kensington home. Unlike male photographers at the time, who could travel to take pictures, Lady Clementina had to stay within the perimeters of her home. However, the exquisite photographs she took of her adolescent daughters “conjure(d) the paintings of the pre-Raphaelites and popular illustrations of Tennyson’s poems by Edward Moxon”.

Despite being an upper-class woman, Lady Clementina removed the furniture and other trappings of her class to create theatrical compositions. She made her own albumen prints from wet-collodion negatives, and liked to work with natural light in a way that was considered ‘daring’ at the time. She used mirrors to explore the idea of “the double”, and was interested in the drape and fall of fabrics to add to her compositions.

Because of her social standing as an upper-class Victorian woman, it wasn’t considered appropriate for Lady Clementina to sell her photographs. However, she did exhibit her works with the Photographic Society of London in 1863 and 1864. Her Titled Studies from Life and Photographic Studies were well received, and she was awarded the Society’s silver medal in both years.

Tragically, Lady Clementina never collected the medals as she passed away from pneumonia on 19th January 1865, aged just 42. It has been suggested that she had a weakened immune system due to constant contact with photographic chemicals.

Lady Clementina’s granddaughter, Lady Clementina Tottenham, who attended the V&A’s 1939 exhibition commemorating the centenary of the invention of photography, was disappointed not to find her grandmother’s work on display, prompting her to donate 775 photographs by Lady Clementina to the museum.

The collection received more attention when painter Graham Ovenden edited the book Clementina Lady Hawarden in 1974, raising awareness of her work. Lady Clementina’s photographs were also included in the V&A’s 1984 touring exhibition, The Golden Age of British Photography, 1839 – 1900, and were exhibited at the V&A in 1999 in the display, Clementina, Lady Hawarden: Studies from Life: 1857 – 1864.