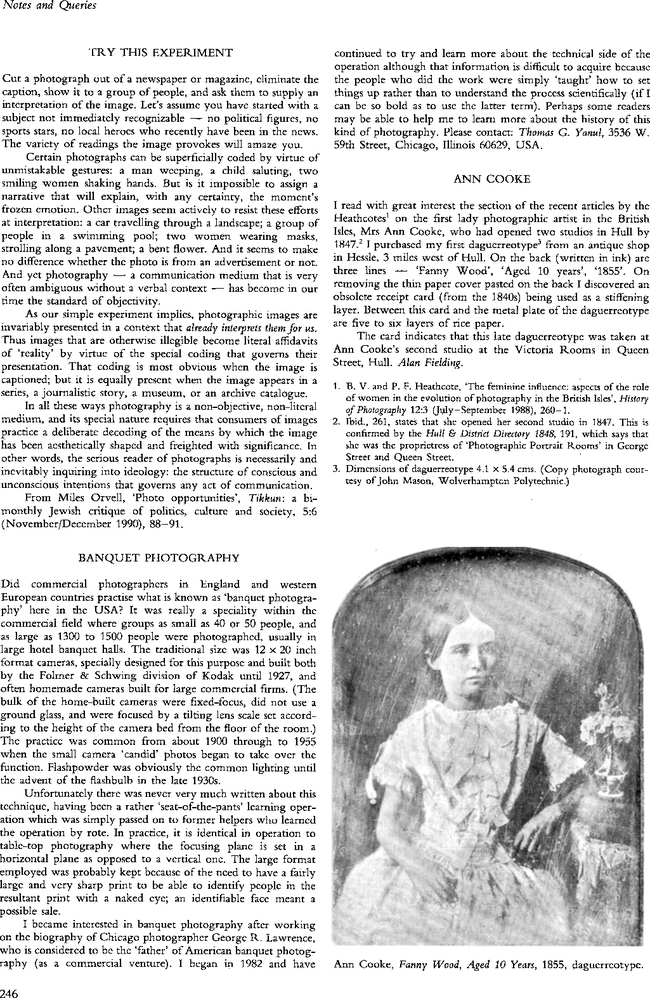 Ann Cooke is credited as being the first female photographer in Britain to open a professional  photographic portrait studio. She was the only known woman to be granted an operating license by Richard Beard to use the Daguerreotype process.

Her husband of 27 years died in 1843 aged 46 leaving her with nine children. Ann turned to photography in order to support her family.

Ann originally bought the daguerreotype license for one month use at her studio in Lincolnshire and transferred from there to take over her brother Edward’s studio in George Street, Hull in November 1845. A few years later she opened another studio in Victoria Rooms, Queen Street, Hull.

There is some evidence from her advertisements to suggest that she valued photographic portraits as an everlasting memorial of the subject, their purpose to be “a speaking likeness of her or him when parted by oceans thousands of miles apart”. Such a desire possibly stemmed from her personal experience of bereavement.

In 1851 she became the first woman in England to declare her occupation as a “Photographic Artist” (redolent in her statement that a Photographic Miniature is  “arts proof of nature’s work” ) She joined fifty men in the same classification. The 1851 census shows Ann’s employment of Annie Dixon, portrait painter, probably to assist hand colouring the Daguerreotype images. Her use of colour had been highlighted in a complimentary report the preceding year – “By the addition of colour, Mrs. Cooke’s portraits are made to assume the most life like appearance, so as to wear the semblance of the most perfect miniatures painted on ivory.”

In 1853 at a time of rapid growth of photographic studios in Hull the patent expired and Ann closed her studio in 1857 at the age of 62. She died in Manchester aged 75 outliving her husband by 28 years.