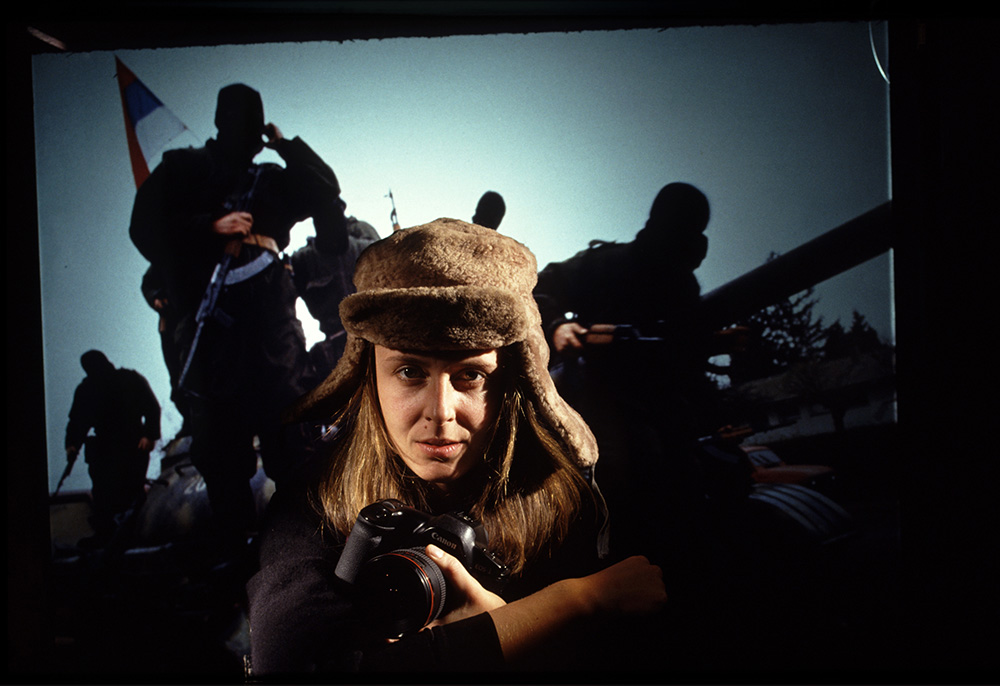 Alexander Boulat stands in one of her photographs, of Arkan’s Tigers.

War photography has often been assigned to men photographers; names such as Robert Capa, W. Eugene Smith, and Roger Fenton dominate the history lessons in this field. Historically, the stories of women and children in conflicts have been forgotten and rarely depicted. Alexandra Boulat changed this, photographing wars from women’s perspectives and paving the way for other women in photography to do the same. 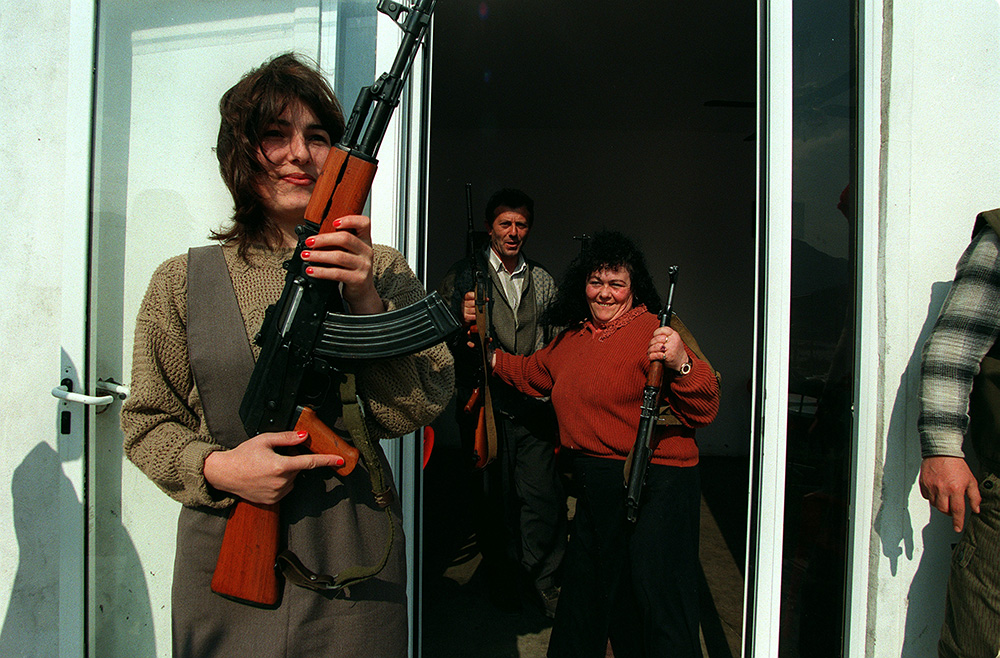 The Albanians © Alexandra Boulat / VII. Bankrupt Albanians took over the Army barracks and ruled the country for a few weeks.

Legendary photographer Alexandra Boulat was born in 1962 in Paris. She studied graphic design and art history but changed her route in 1989 and became a photojournalist. Having witnessed her father Pierre Boulat documenting the world for the legendary LIFE Magazine, she felt encouraged to highlight social injustice as well. 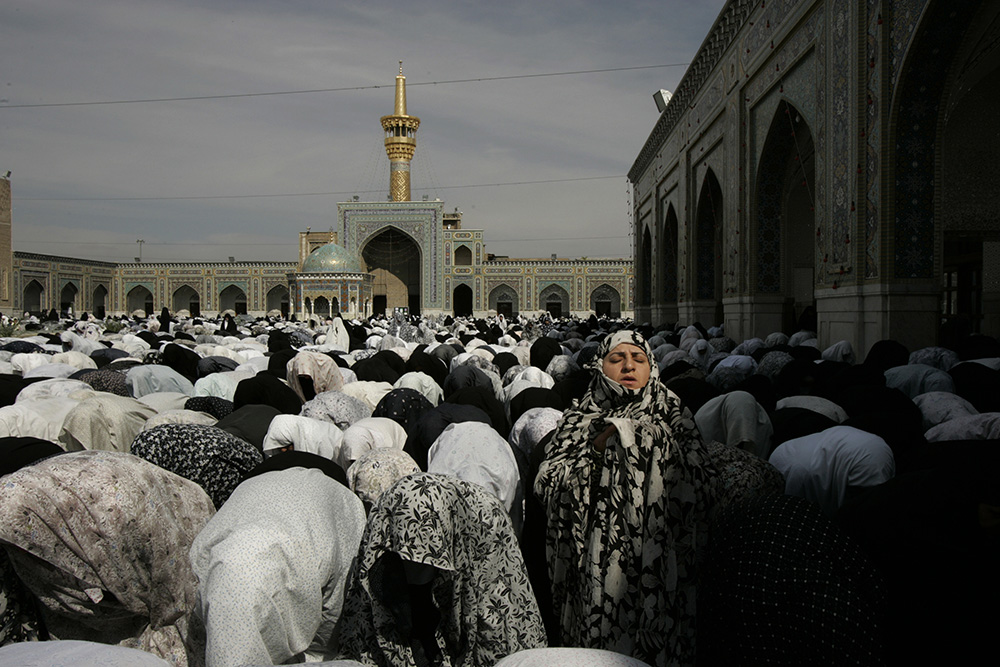 Women in the Middle East © Alexandra Boulat / VII. Thousands of Shiite Women attend the Friday prayer at the Imam Reza mosque in Mashhad, on the last Friday before 2004 Ramadan. Mashhad, Iran. October 2004.

Looking at Alexandra’s photographs, it is evident that she was interested in the everyday lives of people living in war zones. She focused on the individuals and did not shy away from getting close to her subjects. She spent a lot of time in Gaza and one of her last projects depicted Muslim women in this area.

In some images, we see women grieving their lost children and taking shelter to pray while missiles fall from the sky; in others, women are holding weapons and participating in the war. Alexandra did not tell the story from a pure black-and-white perspective; refraining from moral judgements, she documented the world as it is.

Earlier in her career, Alexandra reported from the wars in former Yugoslavia between 1991-1999. She also documented conflict with the Taliban, the everyday life of the Berbers of Morocco, and the invasion of Baghdad by the coalition in 2003. Her work has been featured in publications such as Time, National Geographic and Paris Match. 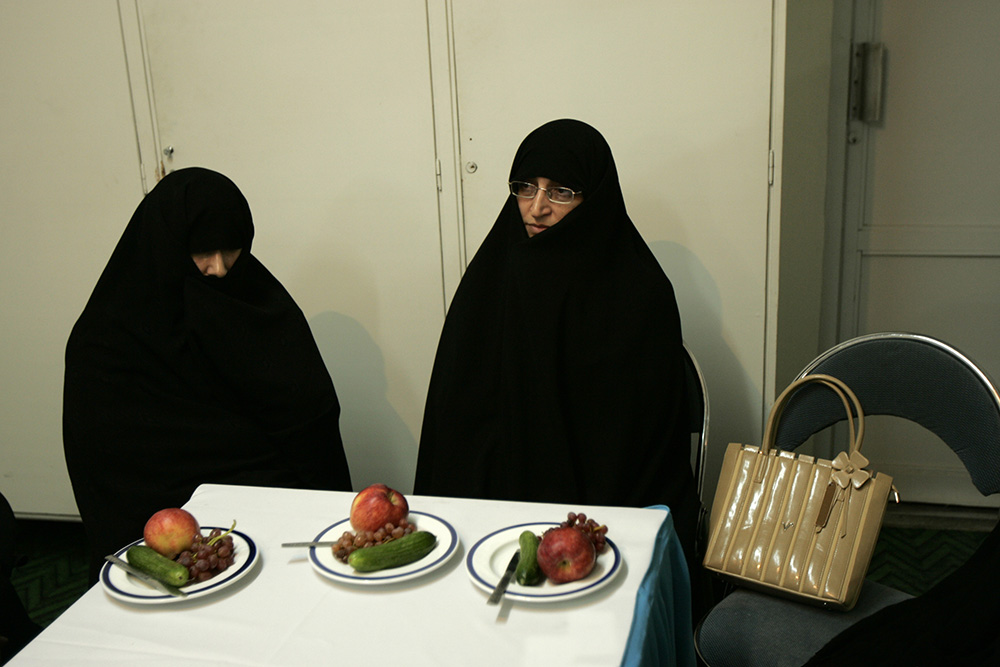 Women in the Middle East © Alexandra Boulat / VII. At one of Tehran government’s women well-being center, a refuge for single women or women with social problems. Mrs. Eftekhari, a deputy in the Iranian Parliament wearing the Islamic Chador, is visiting the sanctuary, invited there for an Iftar party during the holy month of Ramadan. October 2004, Tehran, Iran.

In 2001, Alexandra co-founded VII Agency in response to the growing amount of corporate companies taking over the media and news coverage. In line with her own work, it highlights local voices in conflict zones.

To this day, members of the photo agency focus on issues such as race, gender, and identity during war times. VII Agency offers regular webinars with guests such as Maggie Steber, encouraging others to get into the reportage field.

In future, it is likely that history lessons about war and conflict will discuss the work of more women in photography who have been inspired by Alexandra’s life and legacy.