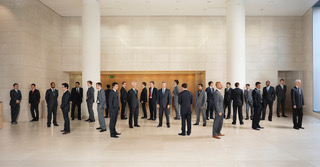 Mitra Tabrizian, is an Iranian-British artist, working as a filmmaker and photographer. She is also Professor of Photography at the University of Westminster. She came to the UK to study for an MA in photography in the early 1980’s and now spends her time between Britain and Iran. She is without doubt one of the most innovative and visually powerful artists working in the UK.

Initially focussing on documentary photography Mitra Tabrizian moved onto conceptual photography to better explore her interest in social and cultural issues. Her images resonate with the isolation of individuals within modern society whether alone or in a group, together but apart.

Tabrizian’s work explores both those who have come to the UK as exiles or immigrants, raising questions of how and where they fit into society, as well as those from the UK who appear to live amongst but not always with those around them. Her book Another Country (2012) is a mixture of images of individuals and groups, both in the UK and Iran which show people alone, isolated from their surroundings even though they look – by their clothes – to belong to the mainstream establishment. For example the photograph ‘City, London 2008’ at the time of the banking crisis appears to look at a group of bankers as if they are waiting fearfully for news of their fate. There is nothing to indicate this other than the fact that they are in a large building, are all men in suits and whilst there are many of them they are each isolated in their own small space. Images in Beyond the Limits (2004), described by Griselda Pollock as ‘fictive visual spaces’, resonate with fear, violence, fantasy, desire and difference. ‘This is that Place’, which accompanied a Tate Modern exhibition in 2008, includes a series called Border showing the loneliness, difference and patience of exiles.

With numerous books, exhibitions and awards behind her she has recently completed her first full length film Gholam (2017). A film about an Iranian exile in London who works as a mechanic by day and a taxi driver by night. He is a lost and lonely man with seemingly no past and no future. The film is a brilliant extension of Mitra Tabrizian’s photography – where the viewer is required to be an active watcher.

Tabrizian when asked about highlights in her career says that her most difficult project has been Gholam, her most successful ‘This is that Place’ and the one of which she is proudest is ‘Borders’.

I have had a great admiration for Tabrizian’s work for many years and believe her to be a great photographer and the sense I get from her work means for me she is the photographic equivalent of Edward Hopper.