Lourdes Grobet is a Mexican photographer most known for her work documenting the vibrant lives of lucha libre fighters both in and out of the ring. Lucha libre meaning “freestyle wrestling” is a distinctly Mexican sport characterised by its theatricality, spectacularly attired masked performers and dramatic choreography. As competitors of a sport rooted in physical strength and aggression, luchadores are often heralded as prototypes of masculinity. In many ways lucha libre is performance art entrenched in masculinity, a spectacle that encapsulates the “machismo” visible in every strata of Mexican culture. In her work Grobet disrupts conventional imagery surrounding luchadores by re-centering her subjects in domestic spaces far removed from the pageantry of the ring. Through casting a feminine gaze on an iconic part of Mexican heritage, Grobet is able to explore the power dynamics and gender roles that are pervasive throughout Mexico. 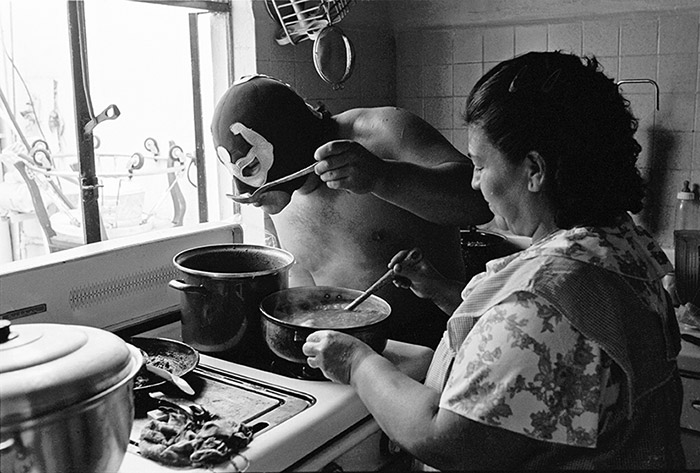 An Unseen Side Of Mexican Culture

Since the beginning of her career, Grobet’s work has rallied against conventional discourse. When Grobet started her career in the 1960s, the male-dominated Mexican photography scene largely consisted of tasteful black and white landscapes and staged portraits. Photographers were far more likely to find inspiration abroad in Europe than at home in Mexico. In contrast to her peers, Grobet forged a path for herself by documenting the emerging Mexican pop-culture of the era. In her own words, Grobet describes her work as ‘scoffing at the notion of preciousness.’ Measured against the conventional standards of the time, Grobet’s early work is carnivalesque and ostentatious. Despite this, her success speaks for itself, as her photographs are undeniably compelling and possess an intimate quality that captures a previously unseen side of Mexican culture.

The sensitivity and humour with which Grobet approaches her subjects is apparent in all her portraits. Grobet has described herself as a “bad portraitist” because she likes to show people as they are, rather than how they would like to be. Throughout her wrestling series Grobet shatters the illusion of the all-powerful luchador. In photos ranging from heartfelt to bizarre, Grobet depicts the wrestlers at home playing with their children, out partying, applying their makeup and even performing mass. The images would be mundane if not for the fact the wrestlers often wear their fantastic costumes and masks during their everyday activities. Grobet’s depictions of these well-known public figures are revolutionary as they show both the toughness and the fragility of these men. Lucha libre fighters are well known for characterising a certain type of hyper-masculinity that is all too common in Mexico. Through merging their public personas and their private lives, Grobet does not strip them of their power and masculinity, but rather adds another facet to their identity. She shows her subjects as not just wrestlers, but also as fathers, sons and brothers.

In addition to documenting male fighters Grobet’s work also looks at female wrestlers more commonly known as “luchadoras.” In Mexican society, women are traditionally seen as damsels in distress, a theme that is heavily reinforced through “telenovelas”, widely consumed Spanish language soap operas. However, Grobet’s luchadoras are nobody’s victims, they showcase impressive physical strength and resilience. In one particular photo taken in 1989, Grobet photographs the acclaimed female wrestler La Briosa bottle-feeding her child while wearing her mask. Shot in black and white the image could easily be nightmare-ish, a masked being looming over an innocent child. Yet, there is a delicacy in the composition that allows the woman’s maternal instincts to be clearly conveyed. Similarly, to her representations of male fighters Grobet resists a traditional gendered narrative, and shows that female wrestlers’ athleticism does not come at the expense of their femininity or motherhood.

It is also noteworthy that while the violence that Grobet shows in the ring is performative, violence across Mexico, particularly gendered violence, is a very real phenomenon. In what the UN has described as a national ‘epidemic’, more than 10 women a day are killed Mexico, typically at the hands of partners or family members. These figures reached record rates at the beginning of the year resulting in women across the country taking part in a nationwide strike. Mexican women vanished from streets, offices and classrooms and across social media the hashtag #undíasinnostros (a day without us) trended. The absence of women in public spaces served not only as a visual reminder of those lost to femicide, but also as a warning about the increasing risk of being born a woman in Mexico. Only time will tell if these protests will bring about change. However, if there are to be any developments for women in Mexico it is growing clear that men must bear some responsibility in generating change. Toxic masculinity must be challenged, as should the idea that masculinity is inherently tied to aggression.

Through her work Grobet centres the wrestling ring as a battleground in which various social tensions are able to play out. Her images interrogate contemporary masculinity and femininity, alongside what it means to be Mexican. By simply recontextualising her subjects in new environments, Grobet is able to demonstrate the way in which the myths that surround these luchadores are as illusory as the masks they chose to wear.