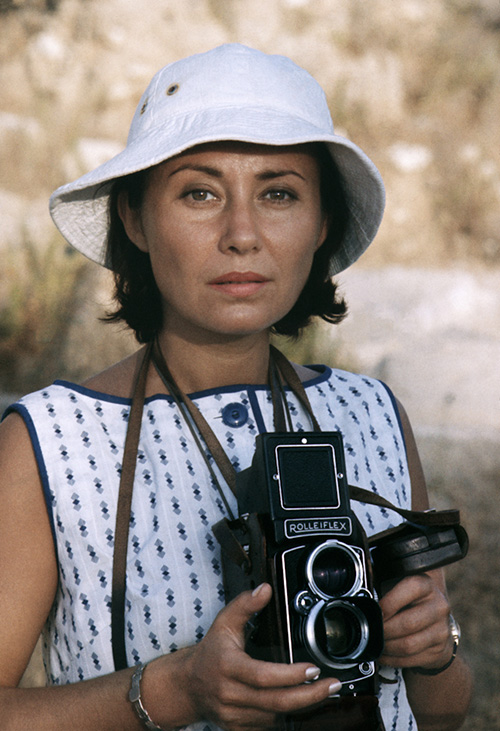 The legendary photographer Marilyn Stafford has died at the age of 97.

An American-born English photojournalist, her eclectic career spanned 1948 – 1980. Bearing witness to the tumult of modern social and political history, she was renowned for her portraiture and street photography.

Among Marilyn’s most famous works are her portraits of significant historical figures such as Gandhi, Sir Richard Attenborough, and Albert Einstein. The latter was her first commission, captured on a documentary film set.

As Hundred Heroines volunteer writer Fanny Beckman learned during her interview with Marilyn, ‘The day she took the photograph, Marilyn had joined a team of documentary film makers creating a film about Albert Einstein, in which he spoke very strongly against the use of atomic bombs. Just before going in to film, they turned to Marilyn, gave her a 35mm SLR camera and said: “You are the still photographer on this set”. The rest is history.’

The experience sparked a lifelong career in photography. Beneath Marilyn’s lens, fascinating stories emerged in abundance. Illuminating the lives of ‘world leaders and poets; artists, writers, and mourning mothers; children playing on the street, victims of war, refugees, and fashion models’, Marilyn sought to alleviate injustice, using her camera to foreground what was commonly overlooked.

Brighton Museum and Art Gallery, who recently hosted a major retrospective of Marilyn’s work, highlight a series of memorable projects in her memory. Photographs of Algerian refugees in Tunisia fleeing the Algerian War of Independence in 1958; recordings of 1960s Lebanon, during a time of peace before civil war erupted over the next decade; and an intimate documentary about Indira Gandhi during India’s intervention in the Bangladesh Liberation War in 1971. Each exemplifies Marilyn’s persistent drive to create positive change through her work.

While her photographs will continue to inspire photographers for generations to come, Marilyn’s legacy will also reverberate through The Marilyn Stafford FotoReportage Award, an annual international prize granted through an award founded in her honour. Reserved for documentary photographers working on projects which focus on unreported or under-reported issues, the award demonstrates Marilyn’s consistent quest to initiate equity.

Investing herself in the future of women in photography, she stated;

“In a year where my own retrospective exhibition and book has come out, I look back at my life’s work and what stands out for me most is the humanitarian work, whether I was covering children living in slum housing in 1950’s Paris, the refugee crisis in the Algerian War of Independence in 1958, or the aftermath of the Bangladesh Liberation War in 1971, my heart lay with the victims of tragedy and neglect.

Although I very much enjoyed shooting celebrity portraits and fashion, I did it largely to be able to support my family and to self-fund my reportage work. I fully understand how women need additional support to make the reportage sustain itself.”

Describing her extraordinary career in her own words, Marilyn once commented:

“I think of myself as a storyteller, speaking through the lens of my camera. I have always endeavoured to find a way to bring awareness to the public eye, to tell stories that are socially relevant and to create change for the better.”