By Katherine Riley30th August 2022No Comments 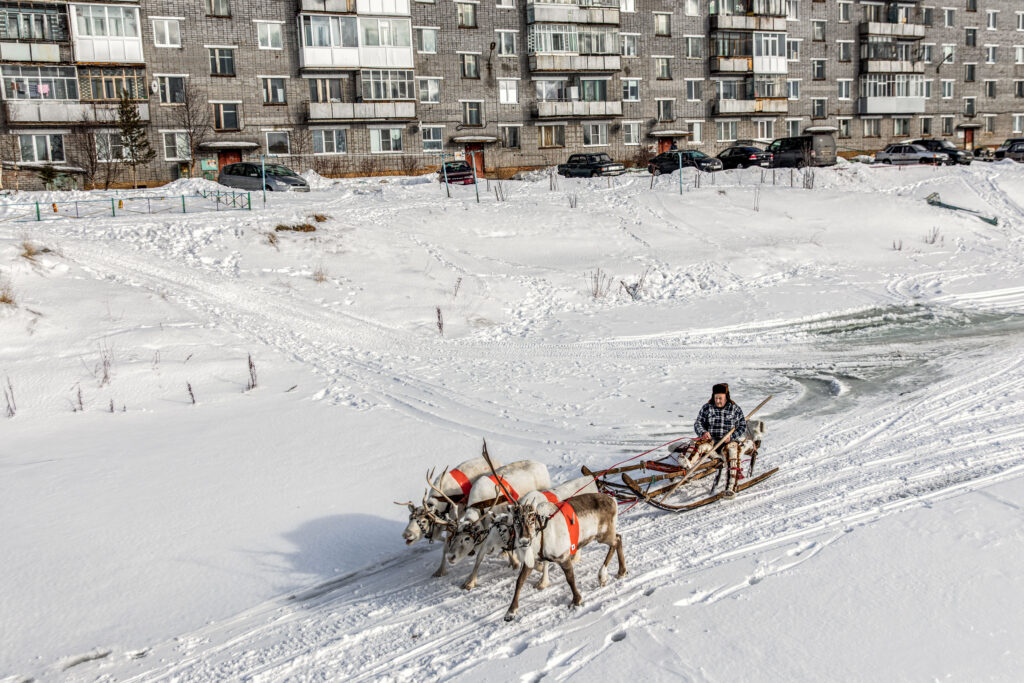 A reindeer, Igor Chuprov, herder speeds on his sled past residential buildings in the village of Lovozero. He has just taken part in a reindeer driving competition during Prazdnik Severa ("the festival of the North"). Formerly semi-nomadic, the Saami community is largely represented in this Òrural colonyÓ of 3,000 inhabitants. / Kildin, a language for Russian Saamis survivors 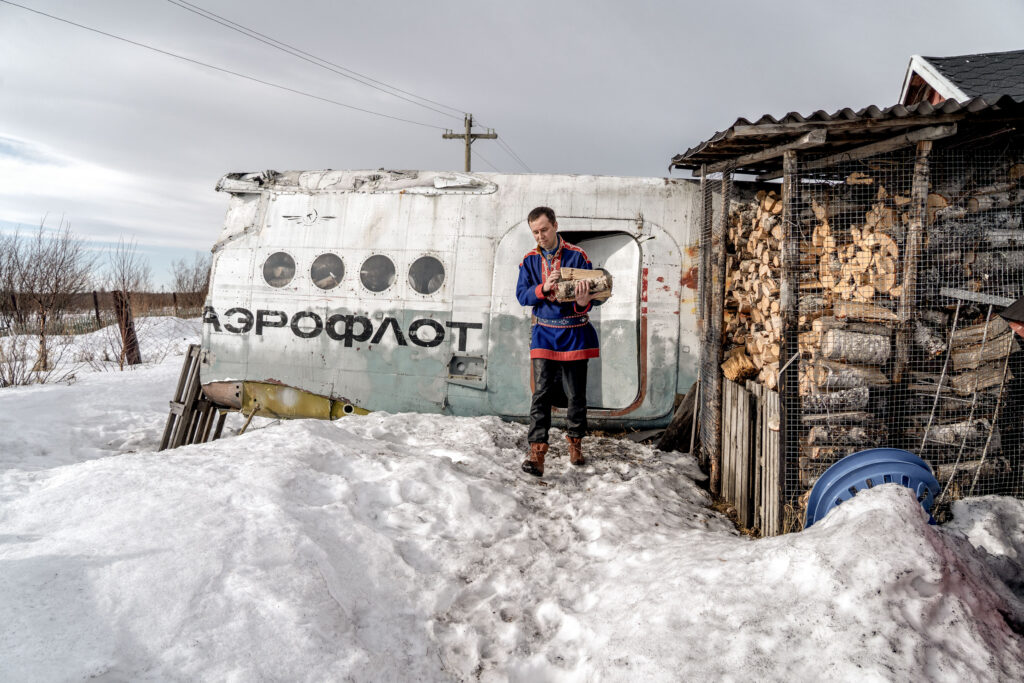 Andrei Zhvavyi, belongs to the Saami ethnic group from Russia. He brings back wood from the wreckage of an airliner that he uses as a hangar. It was his father who, working for Murmansk airport, was able to recover the wreckage of an Aeroflot plane in the 1990s. / Kildin, a langage for Russian Sámis survivors 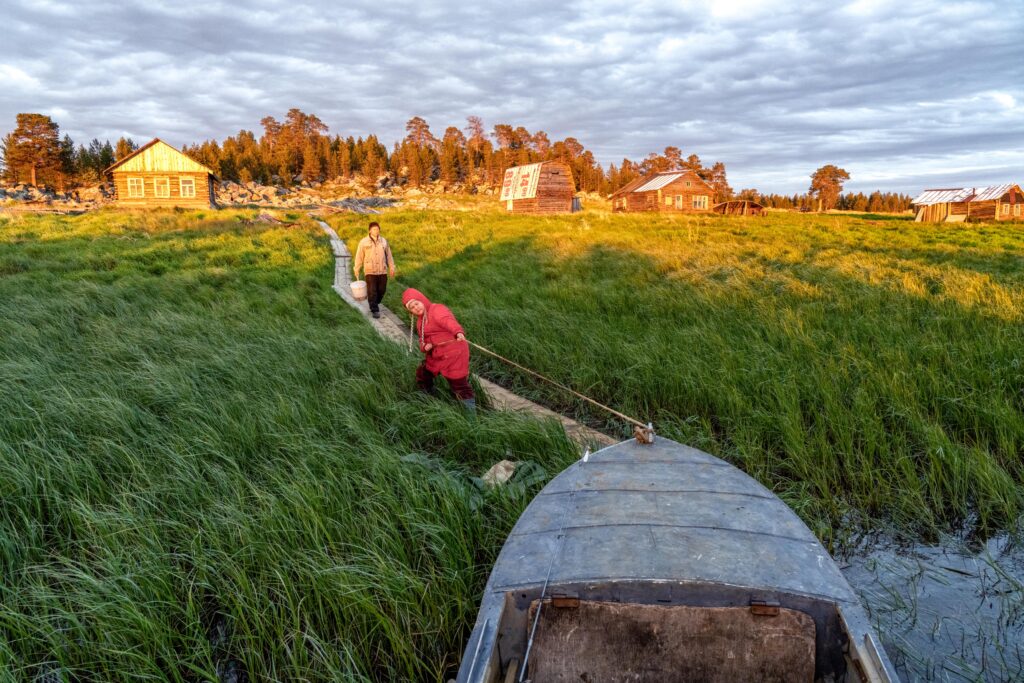 Uliana loves to manage the boat during summer holidays at her uncle at Chalmny-varre village. / Kildin, a langage for Russian Sámis survivors 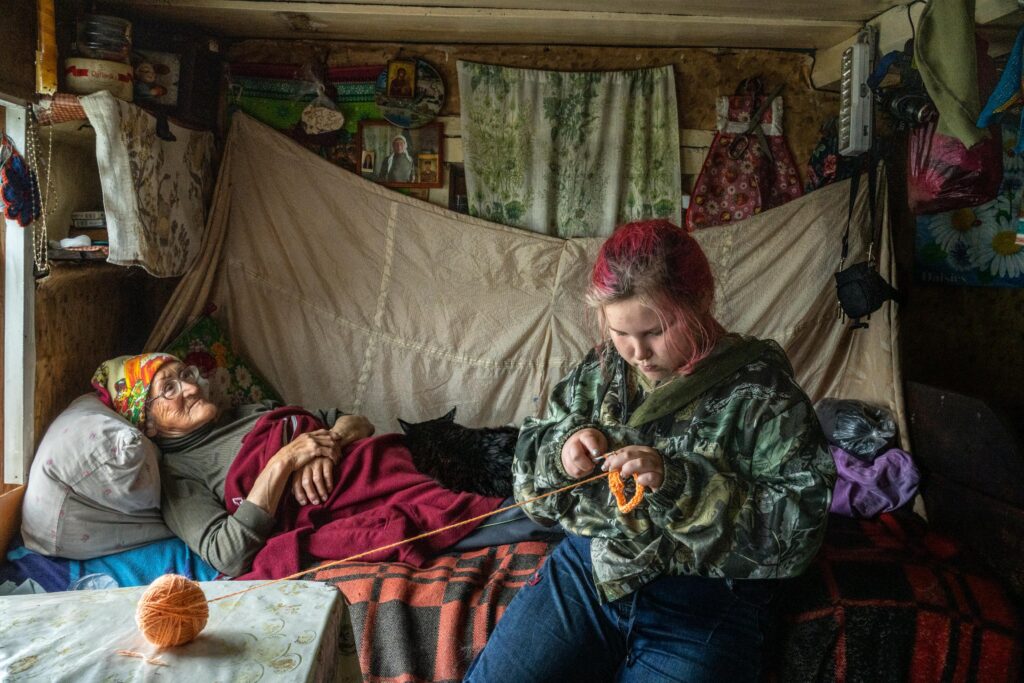 Uliana, like a real Saami girl who should know how to sew clothes for the whole family, loves doing things by hand. She is knitting a decoration for the cat of her uncle's house neighbor, Baba Luba. This grand-mother is the only year-round resident of the officially non-existent village of Chalmny-varre, closed by the Soviets in the 1960s to deplace people. There is no electricity or running water. There are four other houses left and they remain empty. Chalmny-varre was a Saami village of reindeer herders and the name translates as the eyes of the forest. / Kildin, a language for Russian Sámis survivors 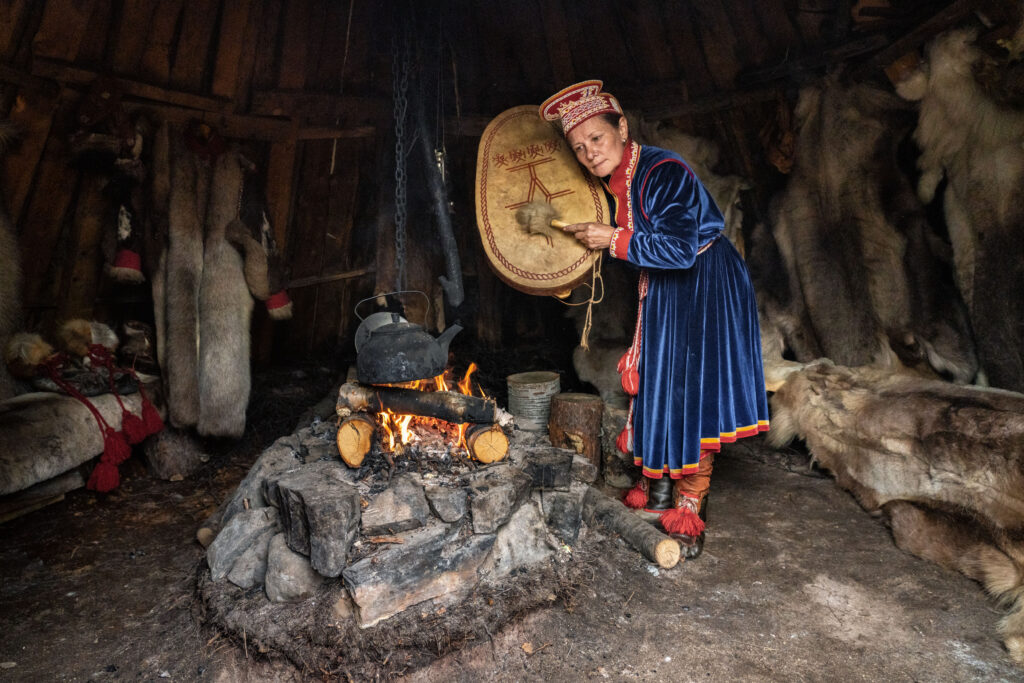 Elena Yakovleva, Uliana's aunt, prepares her drum to sound it and perform a ritual in front of a sacred stone in the Saami mini-village that she has reconstructed for tourists. She inherited the drum from her brother who was a real shaman. The shamans were hunted down by the Orthodox, then by the Soviets. They were constantly threatened with death, and their drums were often destroyed. / Kildin, a langage for Russian Saamis survivors 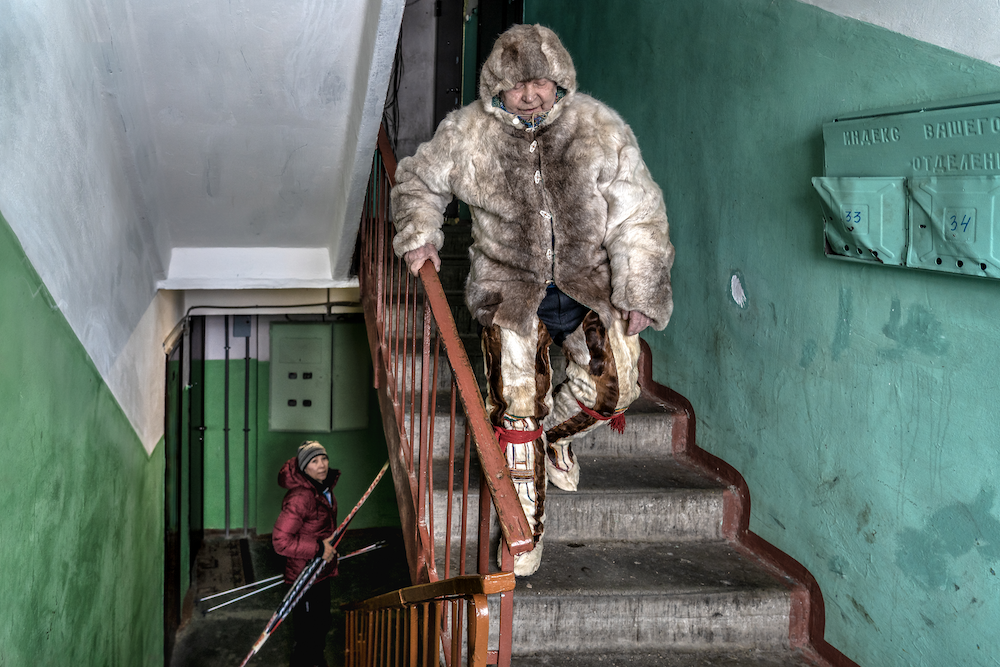 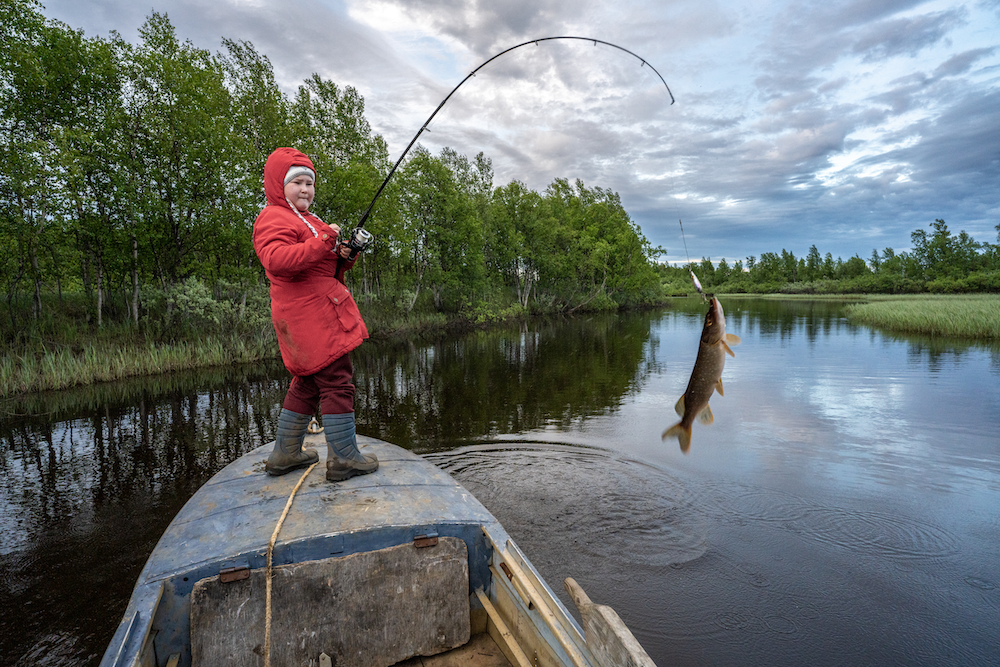 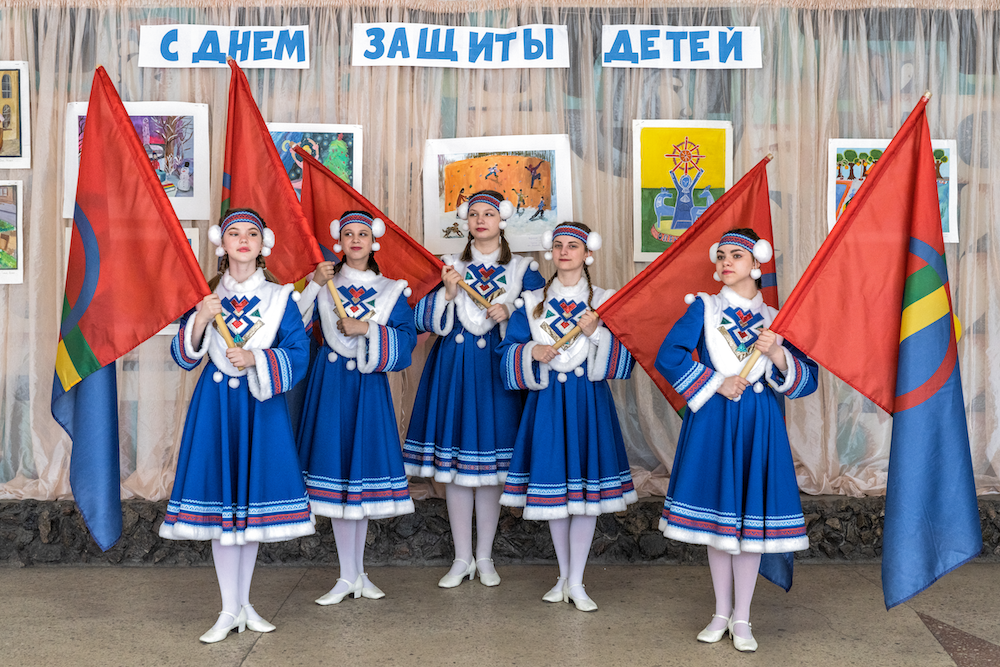 In 2017, Contemporary Heroine Marilyn Stafford launched a photography award alongside FotoDocument. Every year they receive applications from women photographers working in the documentary field. The direction is clear: the winner must highlight a social issue and provide a sustainable solution to the problem she depicts.

Natalya Saprunova was born in 1986 in the arctic region of Russia in Murmansk. After years working as a French teacher in her home country, she moved to Paris where she studied at École des Métiers de l’Information. She decided to stay in France, attaining citizenship, and is now part of the French photo agency Zeppelin. She also teaches photography at Graine de Photographe school in Paris.

When Natalya is not passing on her knowledge to students, she works on her own documentary reportages. Her projects highlight topics such as the transformation of societies, identity, youth, spirituality, and femininity.

The winning series of the Marilyn Stafford Award 2022, titled “Kildin, a Language for Russian Sámis Survivors”, depicts the Sami culture in northern Russia.

There are around 1,500 Sami living in villages in northern Russia. Natalya says that communism destroyed the Samis whole nomadic existence, and their reindeer herds were organised into collective farms called kolkhozes. They were banned from speaking their language, wearing their traditional clothes, or celebrating their culture – so it almost completely disappeared.

Natalya told the Guardian that she has always been fascinated by indigenous people. This award will help her continue the project and focus on documenting the Samis own solutions to the safeguarding of their culture and traditions, while adjusting to a modern lifestyle.

It is evident that Natalya has a strong passion for making the world aware of this marginalised group. We are grateful that she enlightens us in an effort to preserve the culture of the indigenous people in her home country.