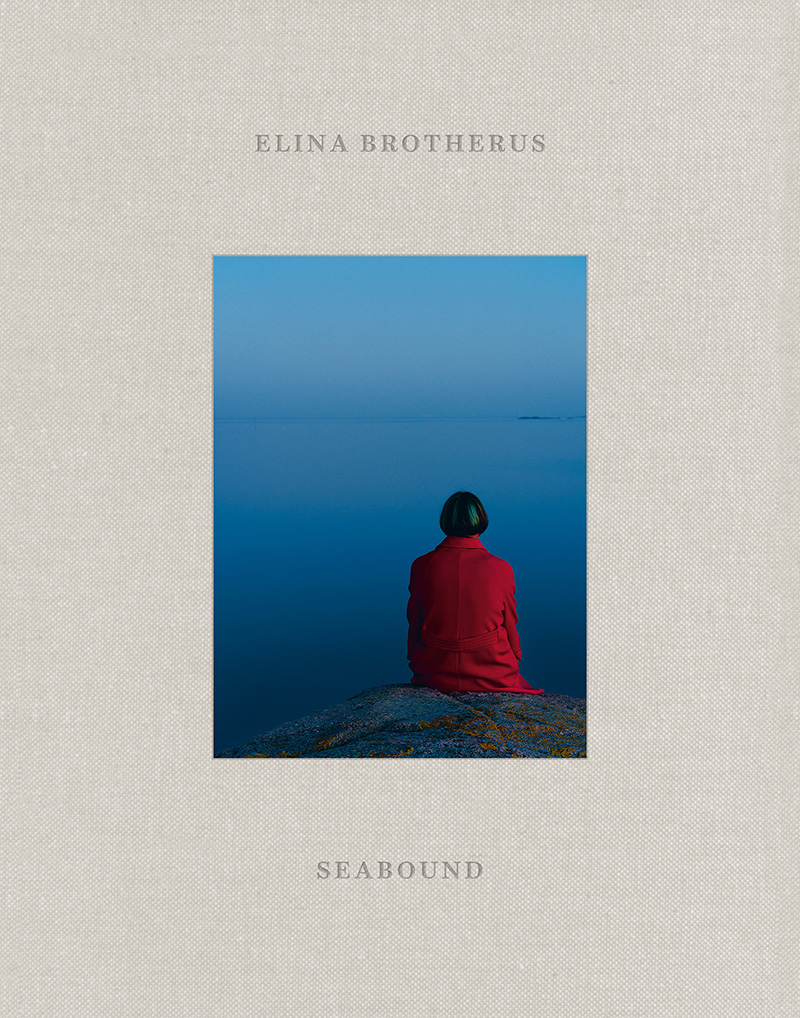 Contemporary Heroine Elina Brotherus’ eleventh monograph is a both a journey along the meandering coastline of Sørlandet, ‘the Southland’, of Norway, and through the varied imagery that she has explored in her work to date.

One of the most renowned women in photography today, Elina’s work is critically acclaimed for its sensitivity and pathos.

In one of the monograph’s texts, Timo Valjakka writes, ‘The cornerstones of Elina Brotherus’ art include the innumerable, always new, yet never random ways in which a human being, a place and a time—the moment the picture was taken—can be engaged.’ 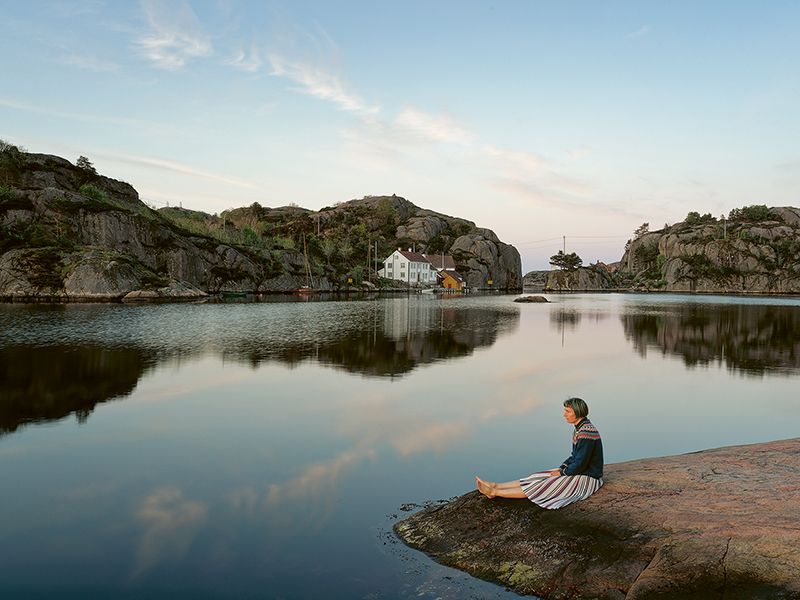 Presented in a rich blue slipcase, ‘Seabound: A Logbook’ forms part of a commission by the Nicolai Tangen Collection/AKO Kunststiftelse, Kristiansand.

The long coastline of Norway winds in and out of fjords, between the mountains, snow, sea, forest and rocks. ‘Seabound’ describes how Elina felt constantly drawn back to the sea throughout her journey.

Elina’s photographic practice is described as ‘making visual discoveries’. Once in a space that intrigues her, she begins to use her body within it. The mix of performance and play converges into a photograph which considers the relationship between the space and the sole female figure.

These distinctive images create a sense of one woman and the sea in a dialogue, sharing a mutual curiosity. 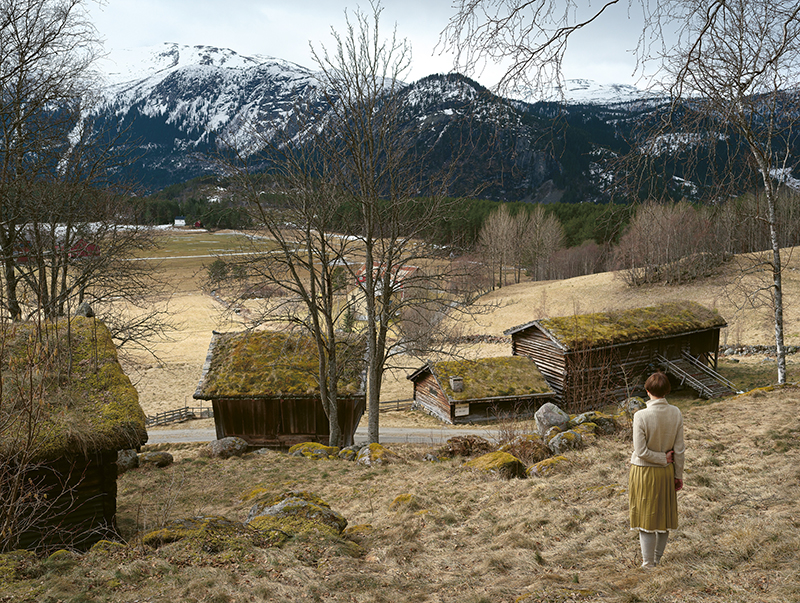 In the series of images inspired by Amaldus Nielsen, the photographer looks backwards through the eyes of the painter and, through subtle repetition, translates the way in which he looked at the sea to the present day.

She inserts her body into the picture, punctuating the landscape and reinforcing this sense of exchange between the watched landscape and the traveller.

Also accompanying the photographer on her travels were the experimental writings of Norwegian performance artist Kurt Johannessen.

In fact, the title comes from a mistranslation of Johannessen’s words which prompted Elina to sit by the open sea two nights in a row.

Reflecting on this occurrence, Elina writes, ‘But as John Cage says, nothing is a mistake. I got a title for the picture, for the series, and for the book, in a process that was guided by chance and filtered through lived life. I wanted to tell you this anecdote because this is how art often happens.’ (Elina Brotherus Website) 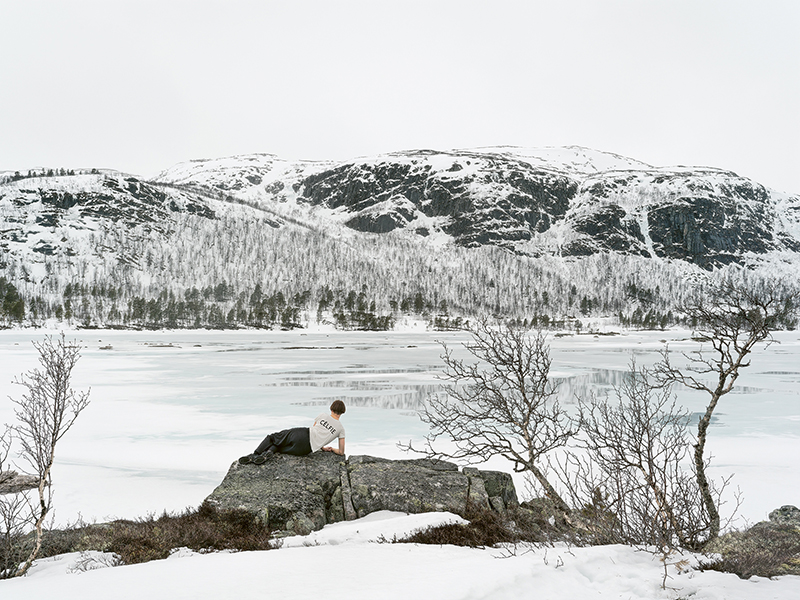 In the playful ‘Lighthouse Diptych’ (2019), the viewer feels time stand still and apart; the time of just being beside, and looking at, the sea. This also comes through in the series of images entitled ‘Watching the Sea through Different Windows’, and the images which return to the same location at night or in different weather conditions.

The works in the book oscillate between a Romantic affection for the landscape and a playful irreverence inspired by Yoko Ono, Geoffrey Hendricks, VALIE EXPORT, John Baldessari and Kurt Johannesen. An image like ‘Setesdal Célfie’ (2019) seems to bring together aspects of Elina’s early work using reclining nudes (see ‘Nu, endormi’ (2003)) and her more recent collaborations with Fluxus artists.

In it we see the historical, the contemporary, and the wry critical humour that Elina brings to her work about the female figure in a space.