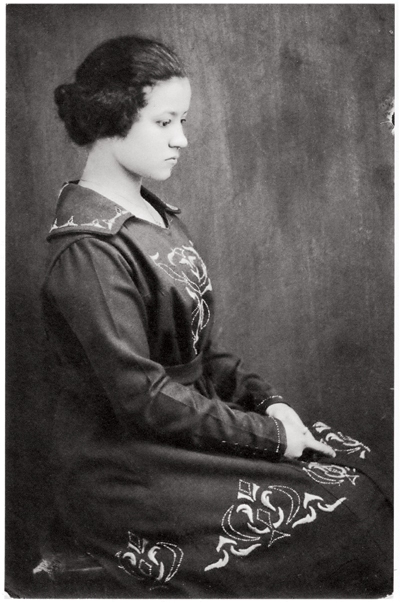 Florestine Perrault Collins navigated the social expectations of her gender and race to give visibility to Black women in New Orleans. She was one of only 101 Black female photographers recorded in the 1920 U.S. census and, unlike her male counterparts, often focused on women and children in a domestic setting. Florestine prioritised the dignity and pride of her subjects and tried to produce portraits that would accurate represent her clients’ individuality. Her work is still relevant as an insight into the lives of the women she photographed and as resistance against the stereotypes surrounding women of colour that persist today.

Florestine began photography at the age of 14, after leaving school to help provide for her family. In the early days of her career she passed as white to get jobs assisting the white photographers who taught her the skills which later allowed her to start her own business. She opened a studio in her home following her first marriage in 1917, before moving to a commercial space on North Calibourne Avenue in 1923.

Talented in both photography and marketing, Florestine’s business soon grew. She tapped into the idea of making photography a part of life milestones, with her portraits including weddings, parties, and graduations, as well as providing special offers for events such as first communion. Florestine also included a self-portrait in one of her 1925 adverts, both as a way of demonstrating her skill and believing that her largely female clientele would find a female photographer better suited to photograph them and their children.

Photography was considered, by some, to be a good vocation for women of colour, because it could challenge white stereotypes and use femininity as a tool against racism. These ideals are reflected in Florestine’s photography. Much of her early work features portraits of young women with props such as flowers and kittens, in poses that mirrored conventional conservative middle-class values of black femininity. In this way, Florestine’s portraits challenged contemporary mainstream portrayals of Black women, showing them as individuals instead of presenting them as subservient or hypersexualised.

Despite her successful career, which lasted nearly 30 years and supported herself and her family through the Great Depression, Florestine was limited by her gender and race. Opportunities for white female photographers were growing during the early 20th century, but Florestine’s opportunities and clientele were limited by her race and her studio’s location in the Black business district.

Her first husband was also very conservative and believed that woman should primarily be devoted to the home.  While photography was considered suitable for women, Florestine’s male counterparts were able to photograph large public events such as political rallies, school graduations, and landscapes. Florestine, by contrast, was largely confined to her studio. Despite this, many women of colour in photography could only work in partnership with their husband, making Florestine’s control over her career significant. Her success in the face of these limitations is testament to both her resilience and talent as a photographer.