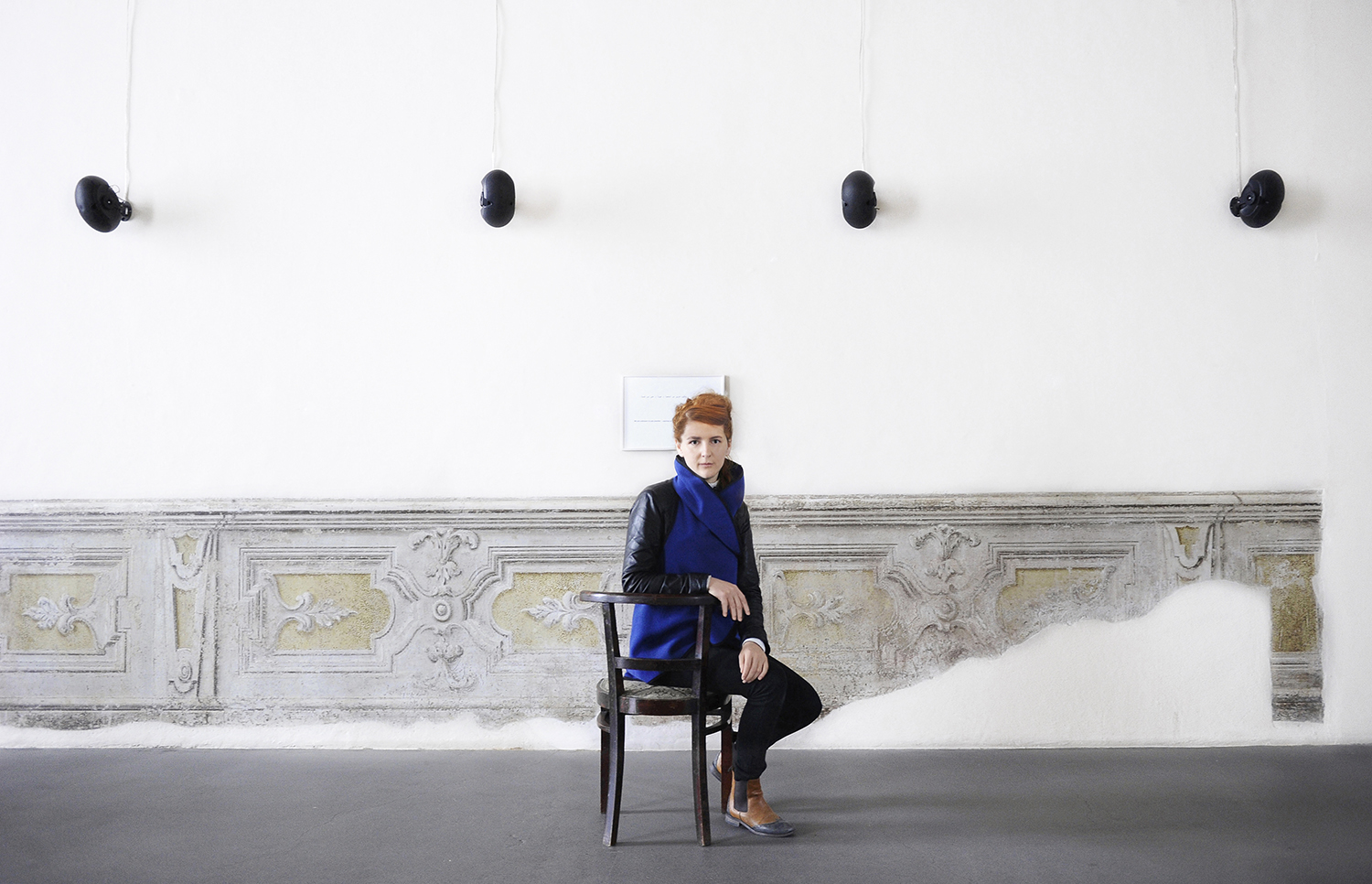 Born in Istanbul, Turkey and now based in the UK, Fatma Bucak is a multi-disciplinary visual artist, whose work engages with themes of political identity, cultural and gender norms, often exploring landscape as a space of historical renegotiation. Via her practices in performance, photography, sound and video, Fatma investigates the fragility, tension and irreversibility of history and the power of testimony and memory.

Hundred Heroines’ Philippa Kelly spoke with Fatma about the development of her varied practices, the power and place of photography in questioning traditional forms of history-making and her hopes for the future exploration of broader political and personal narratives. 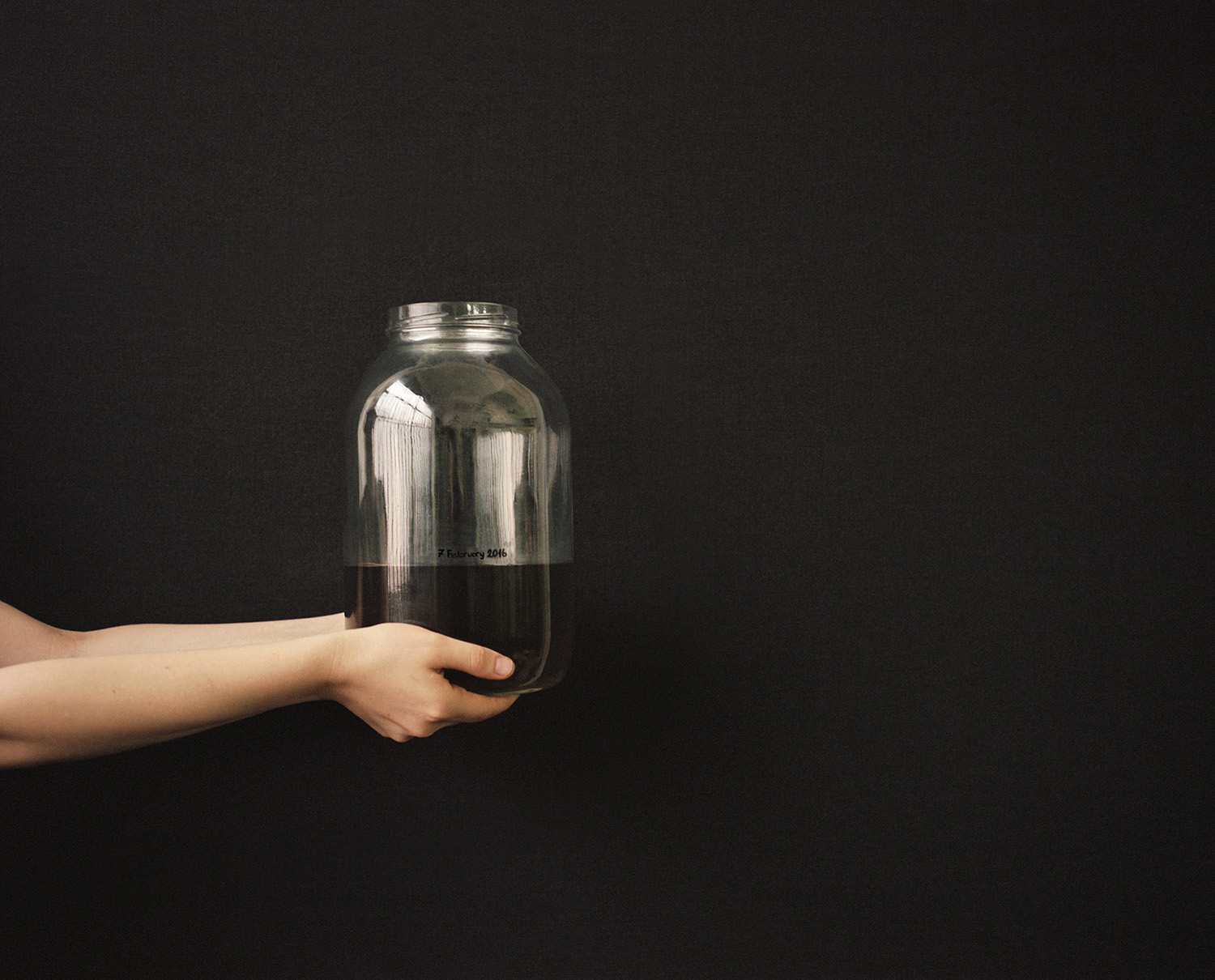 I think that people increasingly feel deflated and defeated, as well as frustrated by the seeming impossibility of any real change. One can only cling to the hope that there are “new” ways of thinking, discussing, and challenging things through documenting realities that we did not see, and that some of those movements lead to real change. 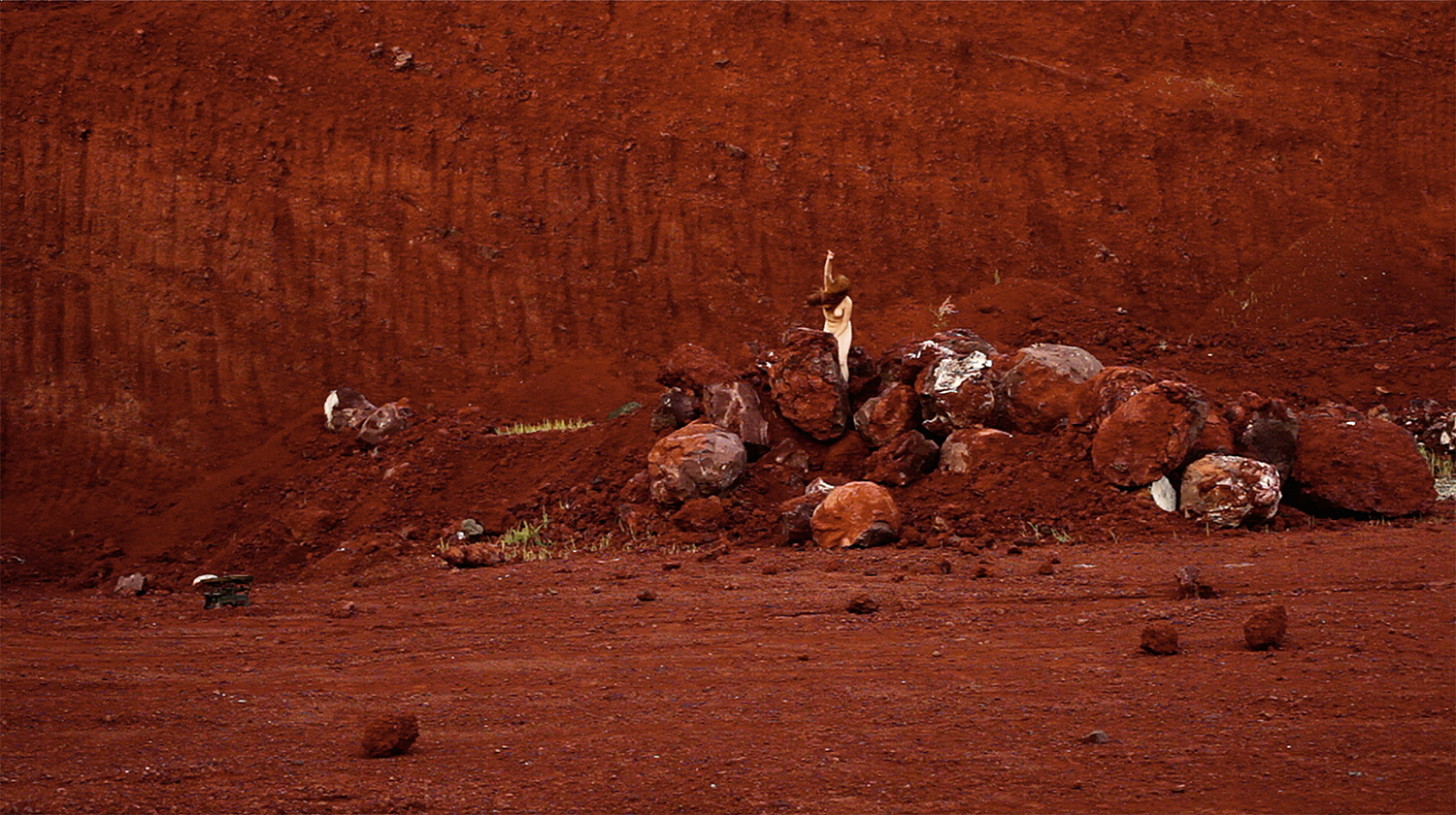 Philippa Kelly: Having previously studied Philosophy and History of Art and Etching, why were you inspired to begin using photography as a means of storytelling?

Fatma Bucak: It was painting and etching that introduced me to a world of thought filtered by experience, a world in which every movement and gesture of the hand leaves behind a time print of an encounter with a person, an event, with rage. Painting and etching allow for time to digest an event while narrating it.

When I first started to use photography, I found the form was quite distinct. In a photographic narrative, time itself is etched, and simultaneously erased. Present and past begin to merge. Yet I also found an immediacy in photography: the immediacy of the gaze recorded at the moment of an encounter with the “thing”. There is no certainty in photographs. They cannot be seen merely as a proof or truth. Though this impression is suggested, in contrast to painting or etching, by the fact of the lens ‘seeing’ the subject in front of it. Within its limited area it’s an open, fertile medium.

My gaze focuses on reality and the familiar, while recording with the camera a fraction that feels unfamiliar or even fictional. With a camera, an artist narrates and collects at the same time. Sometimes an unintended object or event can appear. Recording can still be a performative event because of our understanding of the medium: we know that the image has been taken at a particular moment. You can choose a position; you can become a witness. The physicality of the object focused upon also provides some sort of liberation to me as an artist, I think. I see most of my photographs as a transitional place for a process of change: a place to mourn and remember collectively. 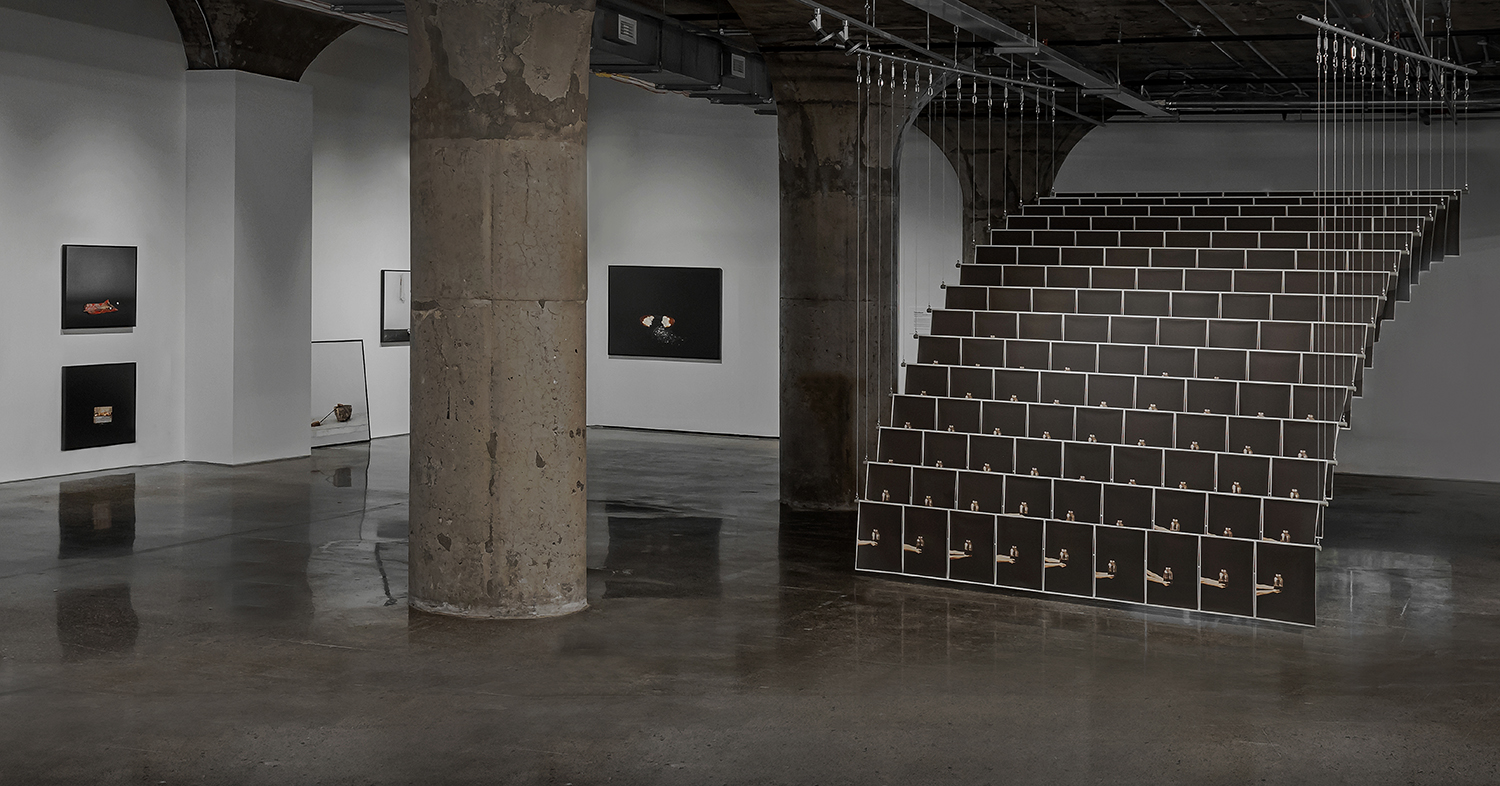 Fatma Bucak’s works, as seen in the exhibition Acts of Erasure at the Museum of Contemporary Art, Toronto. Now extended until May 2021. © Fatma Bucak

PK: Your work encompasses many mediums – photography, video, textiles etc – do you begin each project with a medium in mind, or find that each project inspires the medium as it develops?

FB: Most of the time the latter; sometimes an idea is born into a material from the beginning, sometimes the medium needs to be chosen because of outside conditions. When I first started to work on censorship, the necessity of durability, indestructibility, and replication formed the choice of the material (such as moveable type or metal engraving sheets). On the other hand, when I decided to make a video to work on the concept of fear caused by political turmoil in Cairo, I was forced to reconsider the medium. The fear of the image in that city and the importance of anonymity in the project determined the medium and forced me to reconsider my idea of using a camera to narrate.

PK: Many of your projects explore complex and important themes such as political violence, mass immigration, and oppression. What role do you feel photography has in addressing these issues?

FB: What an artwork such as photography can do is reopen discussions in other ways and ask people to look from other points of view, to think more and think differently; it records, documents, remembers. If one asks whether art or photography as a medium is moving anything around, the answer is that of course it is. It may not shake the foundations or change the law, but can expose and cause people to look again at important matters. It can be discomforting and critical.

PK: Your work, particularly Remains of what has not been said, questions the way in which history is recorded and how certain narratives are often excluded. In a time in which movements such as MeToo and Black Lives Matter have become much more mainstream, do you think we’ll begin to see a broader range of experiences documented? Why is this important?

FB: To the extent becoming mainstream means greater acceptance of political demands, it is certainly positive. What matters is the transformation of society and politics that affects people in their homes. It’s also very important to distinguish between a real movement on the streets and corporate action that appears to embrace radical demands in the service of a public relations calculation. This is true in general, anywhere in the world, and it is certainly the case in America.

There are particular experiences related to certain geographies where it’s almost impossible to hear them: the Kurdish war, the Sahrawi people or personal experiences related to one’s identity, language, or race. It is a necessity to document as much as possible knowing that those events, situations, those atrocities will be excluded accordingly by political power.

I think that people increasingly feel deflated and defeated, as well as frustrated by the seeming impossibility of any real change. One can only cling to the hope that there are “new” ways of thinking, discussing, and challenging things through documenting realities that we did not see, and that some of those movements lead to real change. 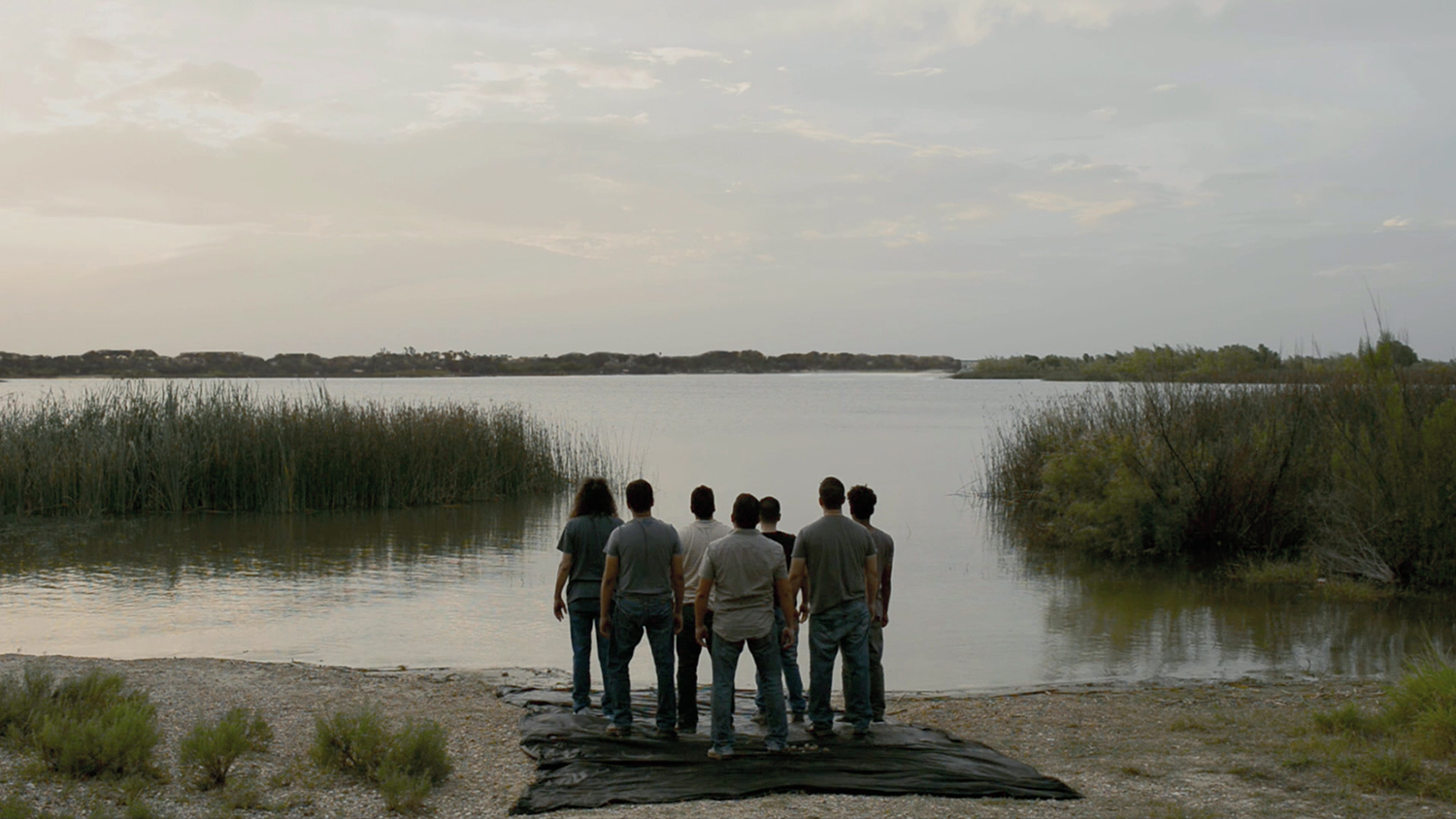 PK: In A Study of Eight Landscapes you bring together seemingly everyday objects from areas such as the Turkish/Armenian and US/Mexico borders. What meaning do these objects take on in this work?

FB: From 2011 I have been working on borders. During that time, I have observed the presence of objects that are common on both side’s borders. I started to collect those objects of liminal places. Sometimes it is bread shared by multiple communities, sometimes a metal bar stuck in the mouth of a fish in a river dividing the land of two countries, sometimes a concrete block lying on a road to a rundown village on an actual border line. These collected objects become a kind of language that gives shape and form, as though a living sculpture, to that which is uncanny in these places. The images explore both the mental and material realities where the conditions of life are highly dependent on the entities on either side. Each image in the series becomes an argument for an undefined land with its dialectic relationship between the land itself and its identity.

I was interested, for the most part, in using objects that are encountered in everyday life. They are about being present when the body is absent, and they are composed in such a way that the familiar becomes strange, revealing a sense of hostility of uncertainty. Working on and about these places presents a challenge: to the political identity of the land, to historical interpretation, and to the erasure by violence of borders, of the geographical and aesthetic of landscapes themselves. There is this sense of transformation, of transition, of pause, and of anticipation that leaves room to find my own words to interpret what I saw, sometimes lived, and felt where nothing is as safe as it appears. This is where I create my own order.

PK: Gender and the male gaze also feature as themes throughout your work. Do you feel it is important to champion the voices of women photographers? Why so?

FB: There was an interesting article I came across in 2019, suggesting that although the majority of students in undergraduate and graduate photojournalism programs are women, women made up just 15 percent of entries to the World Press Photo awards between 2012 and 2017. A survey of major talent agency websites in Australia and their roster revealed that under 25 percent of agency-represented photographers are female. Femaleinfocus data suggests women photographers earn nearly 40 percent less than men in US, and more than 85 percent of commercial photographers are men. Clearly, gender bias is ingrained in this system. Sexism does not exclude art and photography. It is within our lives, jobs and politics. And this is why it’s important for us to remember these numbers and occupy ourselves with equality in salaries, job payments, in job opportunities etc. also in photography and in arts.