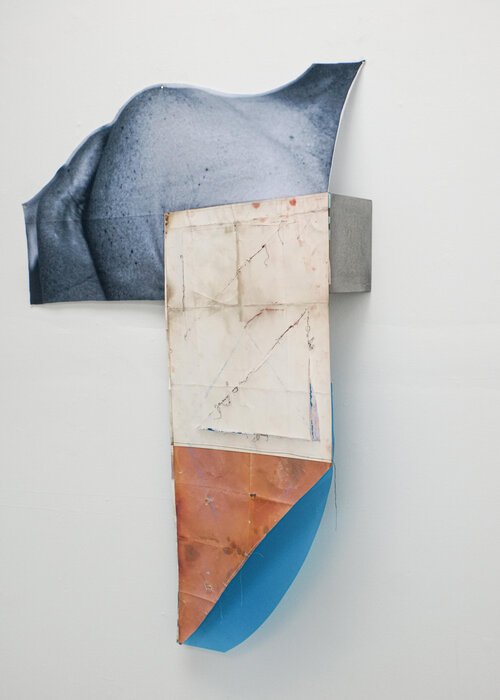 Like many other creatives during this time, Restack has reflected on her own role as an artist during the pandemic and the ensuing social unrest in the United States.

As a professor, Sheilah Restack encourages her students to be courageous in their work; to show vulnerability, an idea which has certainly translated into her own work. Her latest exhibition, Hold Hold Spill, is a reminder of the old, but ever loved snapshots which we hold in our wallets. Folded and opened along the same creases time and time again, they are stored in our pockets, and carried with us as we go about our daily lives. This body of work serves as a comforting reminder that we are more than the roles and spaces we occupy; a tender and nostalgic reference to queer identity and motherhood.

Restack’s shyness as a child has resulted in an intense craving to creatively convey and express emotion years later. The result? A touching response to fine-art photography, which has since evolved to include a fresh interpretation of camera-less photography. She is one of many contemporary artists whose work nudges the boundaries of tradition. Abstracted forms of photography have the ability to break artistic boundaries and reimagine creative expression to make something much more malleable. It is an innovative outlook that reinvents the relationship between the photographer and their tool. For Restack, the tool is her own body; she carries her prints with her, through her day to day activities, walks with them attached to her, and even sleeps on them, imprinting an impressionistic physical form. The outcome is a tangible representation of her loved ones and herself; their physical shape preserved on photo paper as a photogram. 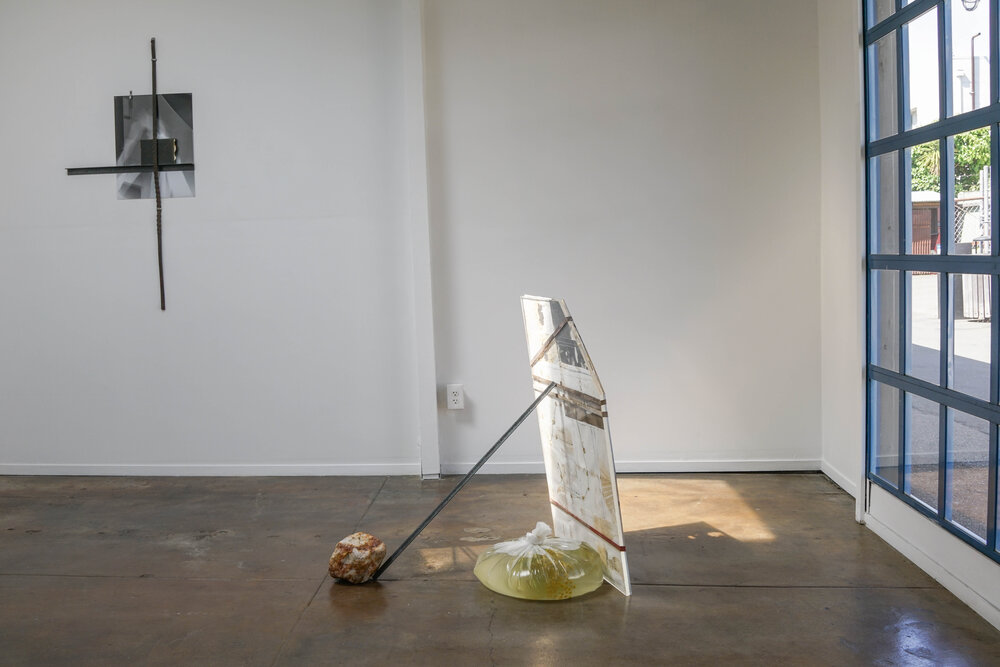 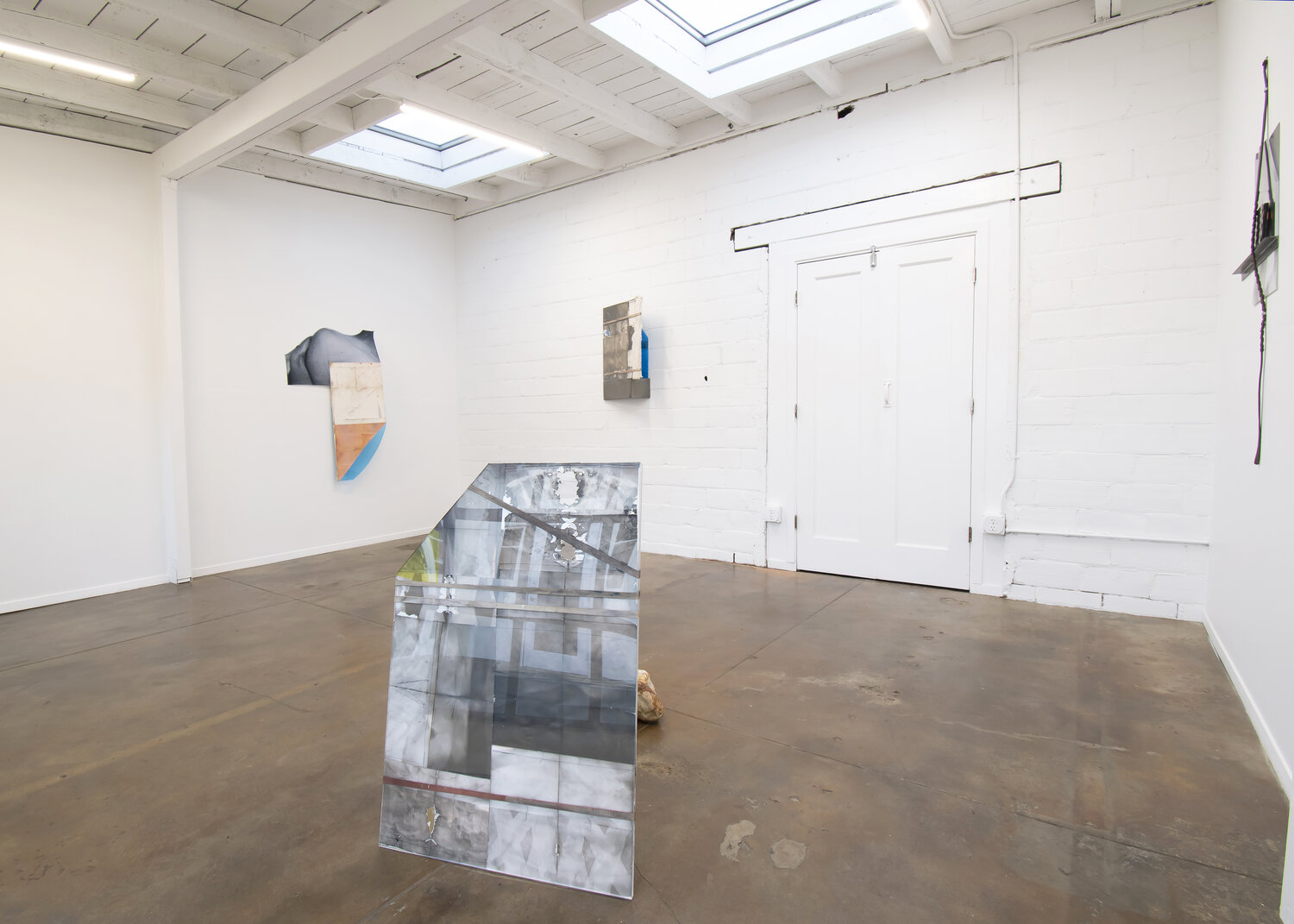 Each piece is characterised by being almost sculptural in construction. A wig draped across a photogram; an old photograph stitched onto a print; a hidden note that reads “nothing as unnatural as what mistakenly falls under natural domain”. The brightest piece, Rabbit was assembled from a piece of felt and fiber walking print, attached with acetate and thread to a cement block. Despite using different materials, there is cohesive tonality across the space- natural, muted colors that offer a sense of peace.

Perhaps one of the most interesting materials a bag full of dill weed taken from Headlands Art Center in California, where Restack completed an artist residency in 2016. The piece Hold House sits on the floor; a board held up by a metal rod and a rock. The dill weed breaks down and slowly seeps its mustard color into the water. It is a constant reminder of the precariousness of personal relationships. They can spill over at any moment yet are taken with us wherever we go and transform alongside us. This idea of affection is further reflected in the titles of each artwork in this series, as they refer to personal relationships and the idea of embrace or holding someone close.

The appreciation for the human body, personal relationships, and the spaces which a person occupies, is also a critique of the social perception of individuals. Why is there such a distinction between our professional and personal lives, when clearly, each has such an effect on the other? In conversation, Restack disclosed how she was separated from other artists during her residency because she was also looking after her daughter. Restack’s critique of having to physically transfer herself from the space in which she is mother, to the space which she is an artist, is certainly one that many other creatives and professionals will understand. For this reason, perhaps such a practice is even more meaningful now, during COVID, as the distinctions between the spaces which we occupy blur. To the point, Restack frequently collaborates with her wife, and she has noted that the pandemic has been an opportunity to be more creative with their artistic expression within their home.

Like many other creatives during this time, Restack has reflected on her own role as an artist during the pandemic and the ensuing social unrest in the United States. As a response to the limited social interactions, Restack asked visitors and patrons to Interface Gallery to write a response to Hold Hold Spill. The product was a series of poignant, unique replies to artworks that combined individual experiences to perceptions of Restack’s narrative. Highlights include a fond childhood memory of eating home-made ice cream (a response to the piece Hold House) and a critique of femininity and the language used to describe womxn (a response to Rabbit). This elevates the sentimentality associated with each piece. Restack has noted that in light of the pandemic, she wishes to continue this type of emotive interaction between audience member and artist.

In reminiscing on her practice and her trajectory as an artist, Restack described her childhood, stating that one of her most seminal experiences involved the realisation that women could be artists too. Since then, her practice has questioned the gender-binary artistic tradition and idolized female roles and queer identity by creating narratives of the spaces which she occupies. Other series of work such as Let There Be No Mastery create a similar emotive response through the usage of muted neutral tones in abstracted visuals that erase the boundaries between sculpture and photography.

It can be said that Restack’s practice has embodied the negotiation between self and space for some time. Her earliest works documented the Nova Scotian landscape and her own position within it through film photography. She stated, “In the earlier work that I did, all my enquiries were about rewriting stories in some way”. Despite the shift in materials, the essence of Restack’s work remains unchanged- telling stories and critiquing overarching social issues, through the vein of personal narratives. Today, that has translated to works that elevate queer bodies by appreciating the intimacy of personal relationships and spaces. These art pieces are both wistful and optimistic; they appreciate the past and cherish the present.

Restack graduated from Mount Allison University (Nova Scotia) with a degree in French and English, completed a BFA in Fine Arts at NSCAD University and received her MFA from Goldsmiths College in London. She has exhibited in many galleries and museums internationally including the Columbus Museum of Art, the Museum of Fine Art in New Mexico, and City Gallery in Wellington, New Zealand.