By Gabby Kynoch3rd February 2021No Comments

Chloe Dewe Mathews crosses geographical and cultural borders as she documents events, materials, rituals, and the enmeshed meanings that form experiences of people and place. Her work challenges conventional photojournalism, approaching photography through a non-prescriptive practice that is often ethnographic in nature. Her work presents areas of geopolitical controversy in all their complexity, from local and diverse viewpoints.

Caspian: The Elements (2018) explores what has been one of the most highly contested inland salt-water lakes bordering Eastern Europe and Asia, a melting pot of culture and a deep resource of minerals and oil. Not to be dismissed as sensationalistic journalism, Chloe records the practices and communities that revolve around this endorheic basin with great sensitivity. Sectioned into three chapters, ‘Oil, Gas & Fire’, ‘Rock, Uranium & Salt’, and ‘Water’, the book grounds a historically galvanic political struggle in anecdotal and material terms. The allure of materiality and human ritual are brought to the forefront as we journey through images of medicinal bathing in the Ishker hot springs of Iran, and oil rig etchings on the side of mausoleums by migrant workers in Uzbekistan.

Chloe’s work reinstates the stories of people and culture in a place often misrepresented. Contextualised as a holistic documentation of this area, we see a land rich in tradition, and since agreements in 2018, conceivably peaceable. Far from polarised clichés of oil and resource conflict, it is the real people and natural landscapes that make this documentation a salient impression of the region. Photographing an area so loaded with histories and narratives of conflict over a five-year period has allowed Chloe to create a body of work that is wholly different from touristic photojournalism and homogenous ideas of Eastern cultures.

Another of her works, Shot at Dawn (2015), takes a contrasting approach to recording areas of conflict. Exhibited as a series of twenty-three photographs, this work documents the systematic execution of soldiers for cowardice or desertion during World War 1. According to military protocol the soldiers were to be shot as a disciplinary measure, before a day of warfare went ahead, while their fellow soldiers walked past. Knowledge of these events was not made public until 1991, despite there having been over a thousand casualties across Belgium, France and Britain between 1914–1918. The photographs appear void and arbitrary, the violence of these otherwise unremarkable sites long since passed. Painstakingly researched, Chloe revisits the uncivil happenings of nations lost in the ethical turmoil of war. The absent subjects are re-contextualised in a space of plurality, comprised of these nondescript sites of atrocity; the camera and modern-day viewers provide something of a new civil contract (Azoulay) through which to consider the war-torn histories of humankind.

Chloe Dewe Mathews : Shot at Dawn from arts-news on Vimeo.

The lack of events and violence in these photographs asserts the unique nature of the photographic moment as a ‘folding back of time on itself’ (Barthes). The images in themselves present no explicit death – as often shown in media accounts of war or disaster – but powerfully employ the freezing of life inherent to photography. As Sontag suggests, explicit and potentially anaesthetising images of violence can be less impactful than a sustained critical response that results from aoristic photography. Chloe symbolically situates these images within a criticism of historical narrative, avoiding the formless ‘punctum’ of instantaneous emotive reaction and the illusion of consensus within.

In the way that a civil contract of photography is said to be hypothetically formed between the subject, photographer and viewer in the dissemination of photography, whether as art or journalism, Chloe’s work acknowledges this cultural weight through both techniques of studium and punctum (Barthes). Another of her series, In Search of Frankenstein (2018), exemplifies her adaptive approaches to subjects over time, typifying a body of work which bridges the gap between mysticism and reality, ritualism and ecology, culture and land. 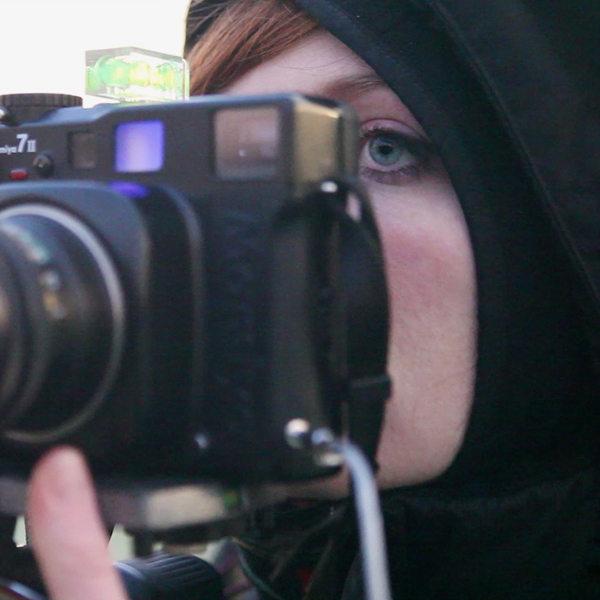