Hailing from Baku, documentary photographer Rena Effendi describes herself as a “global storyteller”. Her work centres on themes of social justice, conflict and the environment, at once evoking both a distinct sense of place and questions of universal significance. Effendi’s stories have ranged from capturing her journey along a vast oil pipeline through Azerbaijan, Georgia, and Turkey in her first monograph Pipe Dreams (2009), to documenting the lives of women living in Chernobyl’s exclusion zone in Chernobyl: Still Life in the Zone (2010). Her 2013 photo book Liquid Land juxtaposes images of urban decay and pollution in Baku with photographs of dead butterflies collected by her entomologist father, while she has also photographed Istanbul’s transgender community and the art of haymaking in rural Transylvania.

Having grown up in Azerbaijan and witnessed the country’s transition to independence after the collapse of the Soviet Union, Effendi now calls Istanbul home. She says her storytelling is shaped by the numerous “layers of culture” she has “accumulated” throughout her life – a statement echoed in the rich diversity of the photographer’s subjects, and her belief that photography can transcend borders and divisions, both geographical and metaphorical. She spoke to Hundred Heroines about the challenges of being a photographer in the Caucasus, the role of documentary photography in promoting dialogue, and the power of photography as a universal language. 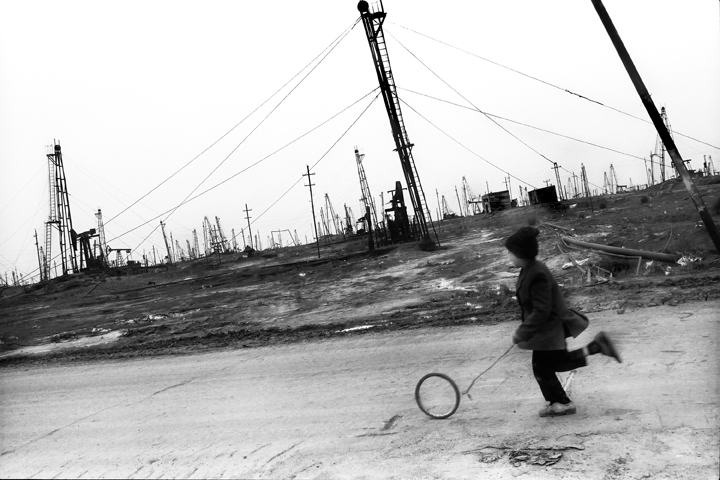 Elise Morton: How is it to be a photographer in Azerbaijan (e.g. in terms of training, exhibitions, and the freedom to take photographs)?

Rena Effendi:  I haven’t worked extensively for Azerbaijani publishing outlets. I’ve given away my work for free to a number of newspapers and magazines in Azerbaijan and perhaps sold a couple of travel features to one magazine, but from the outset of my career, I’ve been working with international publications. Press freedom is still in its embryonic state in Azerbaijan; this results in a lack of professionalism in the media, where self-censorship is widespread. On the other hand, working as a photographer or a journalist in Azerbaijan may be dangerous if you choose to cover any sensitive subject matter or be critical towards the regime and its corruption and cronyism. The Police are ubiquitous and journalists are not protected by the law; on the contrary, many of them end up jailed as their voices of dissent are not tolerated by the oppressive political system. There is a persistent culture of impunity for those in positions of power who commit crimes against journalists. About a hundred copies of my first published monograph Pipe Dreams were confiscated at the Azerbaijani border, censored, banned from import and subsequently burned. But many of my brave colleagues ended up with a much harsher punishment by serving jail sentences for simply being impartial and professional in their job. Some of them even ended up being murdered.

EM: How has Azerbaijan and its culture impacted your approach to photography?

RE:  I am a global storyteller and what influences my photography is not just the culture of Azerbaijan, but that of the world: Flemish paintings, Italian cinema, American and Russian literature, Gabriel García Márquez and Arundhati Roy and the music of the world – from Baku to Timbuktu. Of all of these many layers of culture I’ve accumulated in my life, some have their origins in Azerbaijan – its fascinating history of political and social transition, but also more personal things like the moments and places from my childhood, my home and family, even the food I ate and where I spent my summers. I see culture as an all-round sensory experience that I absorb like air; it impacts me not just in terms of my creativity, but shapes who I am as a person.

What motivates me the most is storytelling

EM:  Are there any Azerbaijani photographers (or others from the region) that you particularly admire?

RE:  Works of the twentieth-century photographer Sergey Prokudin-Gorsky have had an enduring impact on me. He was a Russian photographer and chemist who pioneered a technique for colouring black and white photography.  He travelled all around the Russian Empire in the early 1900s and produced photographs which he then coloured by hand. I was particularly fascinated with his portrayal of the Caucasus region, where he documented people posing formally against the backdrops of their villages and homes – one of the most remarkable historic documents from that era.

EM: How do you see the future of photography in the Caucasus?

RE:  I think many freelance photographers, globally, are suffering from the setbacks of a publishing industry in crisis. In this context it’s even harder to predict the future of photography in a region of the world where it’s never seen a heyday. I don’t want to have a bleak outlook on our professional future, but I try not to think about it, as what motivates me the most is storytelling. I remain laser focused on that trajectory and then I try to find creative outlets to have the work shown as I go along.

With my photography I try to celebrate our differences and the indomitable human spirit, which prevails over hardship.

EM:  What prompted your move to Istanbul? Has the city shaped your practice?

RE:  Istanbul has always appealed to me. It’s one of the most beautiful cities: complex, historical and multicultural. I would pass through it several times a year for over a decade until I finally decided to move here. Geographically, I find it very well situated and I love the Mediterranean and everything around it is culturally alluring for me. This is a city where I decided to settle for the unforeseen future, maybe for the rest of my life. I haven’t felt this at home elsewhere in the world.

EM: Your series Liquid Land and Pipe Dreams deal with environmental and social questions. What do you think about the role of documentary photography in the discussion of these issues?

RE:  The role of documentary photography is to give commentary in the form of a visual narrative on global social issues that humanity is facing today, such as the environment, conflict and inequality. Documentary photography is a slower, more deliberate form of journalism that does not only inform and provide a platform for public dialogue on these issues, but remains an important way of documenting life for posterity. It’s what motivated me to work on both of my monographs.

EM: When you are taking photographs, do you have a particular audience in mind?

RE: I don’t have a particular audience in mind, since I think that the language of photography is universal and it should be accessible to all. Once I was contacted by a man in India who asked my permission to make a 3D-print rendition of my photograph because he wanted to show it to his friend, a woman who was blinded by an acid attack. I sent him the image, he made the print and, as she touched the contours of the image, he told her the story of the photograph. This made me think of how universal, not just photography, but all languages of artistic expression can be, and how they often transcend geographical borders, social classes, political affiliations, sexual preferences, and gender identities and touch and inform people across generations. With my photography I try to celebrate our differences and the indomitable human spirit, which prevails over hardship.