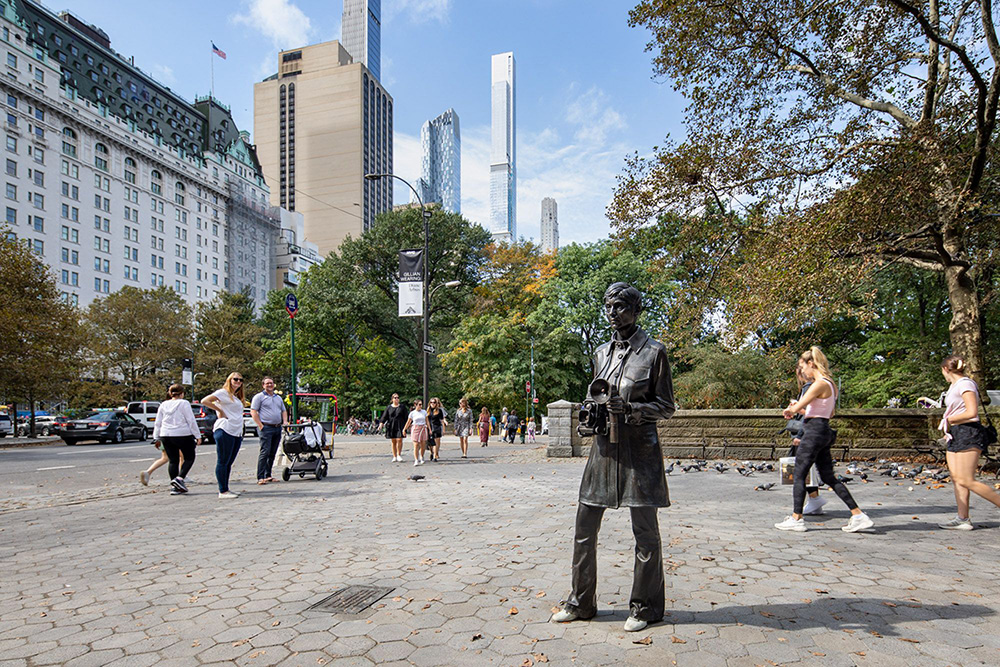 A distinctive example of the influence between women in photography, past and present,  Public Art Fund has recently unveiled British conceptual artist Gillian Wearing’s life-size bronze sculpture of Diane Arbus — a striking tribute to the legendary photographer.

Gillian’s sculpture is on view in Doris C. Freedman Plaza at the southeast entrance to Central Park. It depicts Diane with her finger on the shutter button of her iconic twin lens camera, as she might have been seen in the 1950s and 60s. 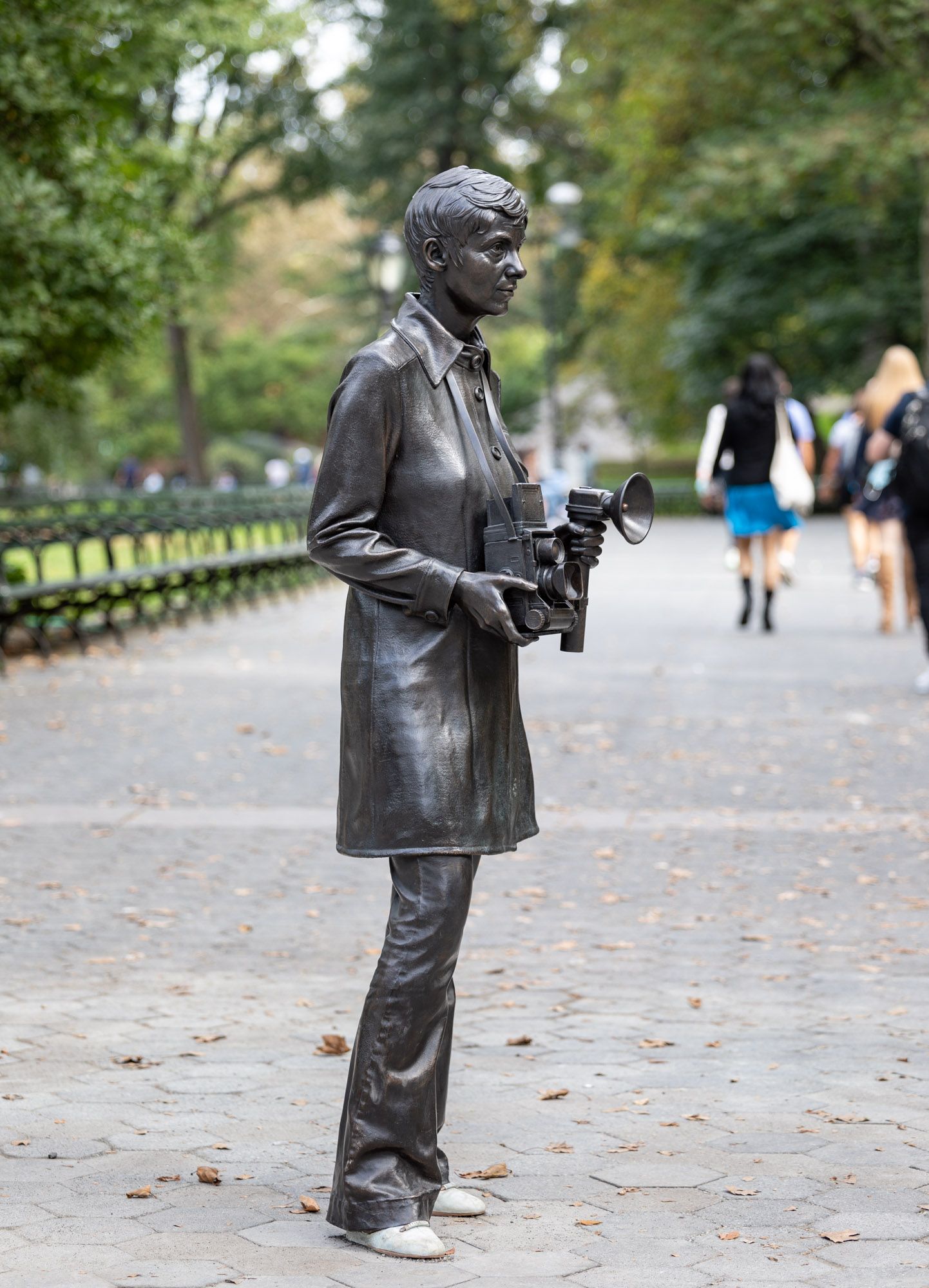 A lifelong New Yorker, Diane frequently visited Central Park to capture photographs of everyday people. Posthumously, Diane has become one of the most widely known American photographers of the 20th century; the first major retrospective of her work, held at the MoMA, New York, in 1972, attracted the highest attendance of any exhibition in MoMA’s history to date.

Diane herself commented that her images represented ‘the space between who someone is and who they think they are.’ In this sense, her work explores the hierarchical relationship between spectator and subject, posing new questions about the ethics of vision.

Gillian’s sculpture subverts convention, invoking Diane’s exploration of this hierarchy. In contrast to nearby sculptures, the 5”6’ sculpture is presented at street level without a plinth. Directly meeting visitors at eye level, this positioning reflects the intimacy of Diane’s photographic methods.

To further humanise the sculpture, Diane’s bronze shoes are painted white. This flash of contrast emphasises the point at which the sculpture meets the pavement, echoing Diane’s assimilation with her environment. Such intimacy is evident in Diane’s description of her approach, inscribed upon a nearby plaque:

“If you scrutinize reality closely enough, if in some way you really, really get to it, it becomes fantastic.” 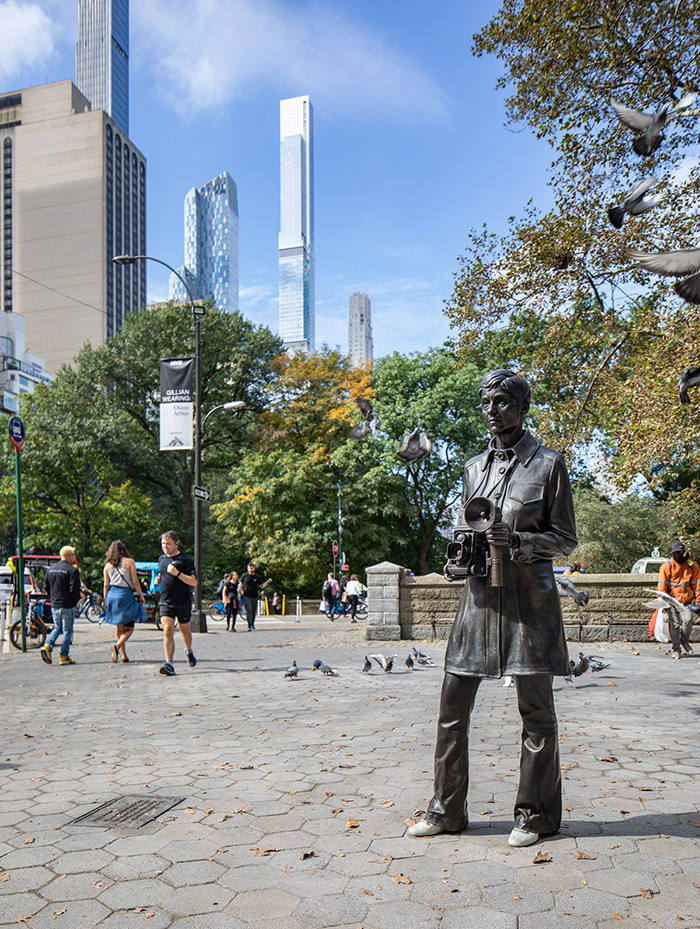 Gillian used the labour-intensive ‘lost wax’ process to create the Diane Arbus sculpture – a method of metal casting in which molten metal is poured into a mould, created from a wax model which is melted away.

Commenting upon the work, Public Art Fund Artistic & Executive Director Nicholas Baume, stated, “An artist best known for her exploration in photography and video of the complex and fluid nature of human identity, Gillian Wearing’s embrace of cast bronze statuary may be unexpected. Yet the unexpected is precisely what has fascinated Wearing all along.”

Encompassing photography, video, sculpture, and painting, Gillian’s work reveals her long-standing interest in the activation of public space. A homage enriched with immediacy and respect, the sculpture symbolises how Diane’s legacy remains vital to Gillian’s own artistic practice, and continues to inspire other leading photographers and artists today.

Gillian’s tribute coincides with the retrospective of her work at the Solomon R. Guggenheim Museum, Gillian Wearing: Wearing Masks, on view from 5th November 2021 to 4th April, 2022. Her bronze Diane Arbus sculpture is on view from 20th October, 2021 until 14th August 14, 2022 at Doris C. Freedman Plaza, Central Park.